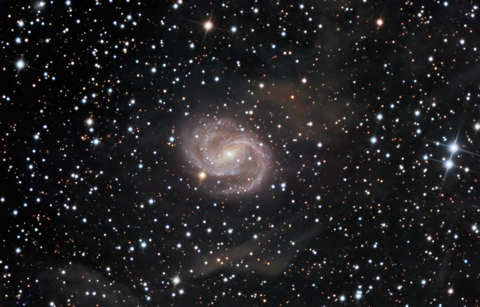 This image was provided by Martin Winter and Warren Keller. Please click on it for a high resolution version.

In 1877 Jerome Coggia discovered a nebula in Cepheus that was given the name NGC 6952. Later Lewis Swift independently found a nebula nearby in 1885. Denning later showed that these were one and the same object but Coggia had a positional error of 20’. The designation NGC 6952 was later dropped and Dreyer issued a correction in the IC2.

The galaxy is classified as SAB(rs)bc, a barred spiral galaxy. Its bright core also suggests it is a Seyfert galaxy (a mild active galactic nucleus or AGN). It would appear to be a type two Seyfert galaxy. NGC 6951 lies about 65 million light years away and has been home to two recent supernova in 1999el and 2000E. The galaxies location also means that it is involved with a lot of galactic cirrus as this deep image shows. An even deeper image can be found at the Capella Observatory website. A wide field view of the cirrus can be found on Oleg Bryzgalov's astrophoto website. The galaxy is interesting because it is showing both strong star formation activity and an active core. As the galaxy is an isolated system it is not clear what has triggered the current round of star formation. The galaxy appears to have a circumnuclear ring and the gas flowing through the bar appears to stall here and provide the material for massive star formation. This is not unlike what seems to be happening in our galaxy on a smaller scale. The ring appears to be about 1.5 billion years old and seem to have been forming stars for most of that time.

Visually the galaxy is going to be a difficult target. From typical UK skies I think that at least 30cm+ aperture will be needed. Through a large telescope the galaxy shows a bright core and a fainter envelope. The envelope is definitely elliptical in shape. Smaller instruments may well just show the core.