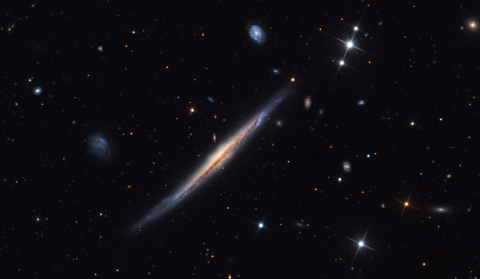 Although as we move into May chasing faint galaxies becomes more problematic with the shortness of the observing window there are still some possibilities early in the month. Although NGC 5529 was first discovered by William Herschel in 1785 this edge on spiral galaxy in Bootes has remained off the radar for many observers, perhaps because of its faintness. Thought to be at a distance of about 140 million light years its size would be about 250000 light years, about twice the size of our galaxy. The nucleus of the galaxy shows a box like shape, often taken as an indication of an interaction and the spiral arms also show a warp. The galaxy itself is classified as an Sc galaxy a few degrees from edge on (86 degrees) it is likely that it is a barred spiral. In this way it is very similar to the better known NGC 4565. In the same field of the galaxy are two other NGC objects in NGC 5524 and NGC 5527. These are both much fainter and were discovered in 1855 by Mitchell using the 72” at Birr. NGC 5527 may be a companion of 5529 but 5524 is likely to be further away. The galaxy that distorted NGC 5529 no longer appears to be in the field with it. Observations using the Infrared satellite ISO showed that NGC 5529 appears to have the largest known halo of PAH molecules yet seen (Polyaromatic Hydrocarbons). This must be symptomatic of some large scale outflow from the galaxy. Herschel observations of NGC 5529 also suggest some oddities with the dusk disk as it does not fit a simple pattern. NGC 5529 appears to be the dominant member of a group of about 17 small galaxies and this may also be the cause of the halo gas. Of these thirteen would appear to be NGC galaxies NGC’s 5529, 5533, 5544, 5545, 5577, 5589, 5590, 5596, 5614, 5656, 5675, 5684 and 5695. Observationally NGC 5529 is going to be a challenge and although observations have been reported with instruments as small as 15cm to see any detail, in particular the dust lane are going to require much larger instruments in the 40cm+ class, certainly from typical UK skies. A nice drawing through a 45cm telescope can be seen at the Astronomy Sketch of the Day website. As can be seen there are many other bright galaxies in the field including NGC 5557. These will fit in the medium power field of many telescopes. However to see the fainter members of the 5529 system you will need to use higher powers.

A Megastar© identification chart for the galaxies near to NGC 5529.