The NGC 507 group is the single richest group of galaxies in Pisces containing 9 NGC galaxies brighter than 15th magnitude. There are also a number of galaxies listed in the IC here as well. The accompanying chart also shows the profusion of fainter background galaxies that are probably not part of the group. The group is part of the Perseus-Pisces super cluster confusingly it is also known as the Pisces cluster along with the NGC 383 cluster. The main cluster galaxies were discovered by William Herschel in 1784. 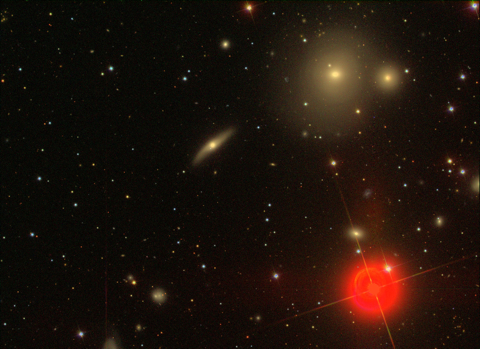 This image of the NGC 507 region was provided by the Sloan Sky Survey.

The largest and brightest galaxy in the group, NGC 507 was discovered to have faint concentric shells by Halton Arp when looking at plates taken by the 200". He subsequently added it as Arp 299 in his catalogue of peculiar galaxies. These shells are now thought to be the product of ancient mergers. NGC 507 is also an AGN and seems to have radio lobes associated with it.

NGC 508 is not part of Arp 229 despite some sources suggesting it is. The description by Arp is quite clear what Arp 229 is. Although they are quite close in angular terms it is not clear that NGC 508 is actually physically associated with NGC 507. 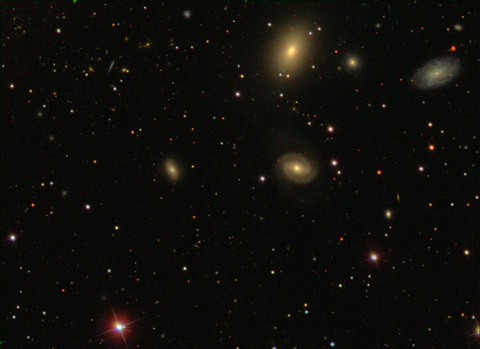 This image of the NGC 499 region was provided by the Sloan Sky Survey.

The group does show a number of small sub-structures in its central core which suggests that it may still be in the process of accreting other smaller groups of galaxies and has not yet reached its final state. NGC 499 appears to be at the centre of a second peak in the X-Ray halo and may be the central galaxy of another group merging with the NGC 507 group. Unfortunately it is not possible to say which way NGC 499 is moving.

The main part of the group is in the form of a chain but there are a number of galaxies off the side of this chain as well. The group would appear to be at a distance of 63 Mpc and forms part of the main filamentary ridge of the Perseus-Pisces super cluster that also contains the Abell clusters 262, 347 and 426. 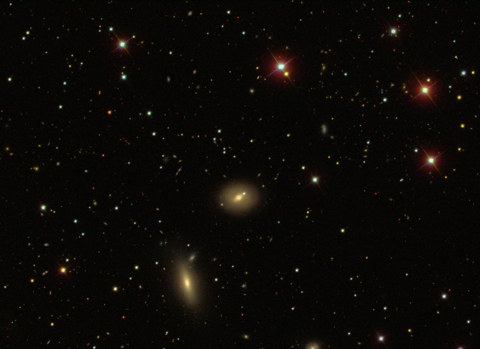 This image of region around NGC 515 and NGC 517 was provided by the Sloan Sky Survey.

Visually this is a stunning group. The brightest members should be visible in a 22cm telescope but it is with larger telescopes that the true beauty and number of galaxies in the field is really shown. The whole group will fit in the medium power field using a hyperwide (100 degree AFOV) eyepiece.

Surprisingly there are no decent scale amateur images of this bright group so the images accompanying this piece are all from the Sloan digital sky survey. Perhaps a challenge for our members who have CCD imagers.