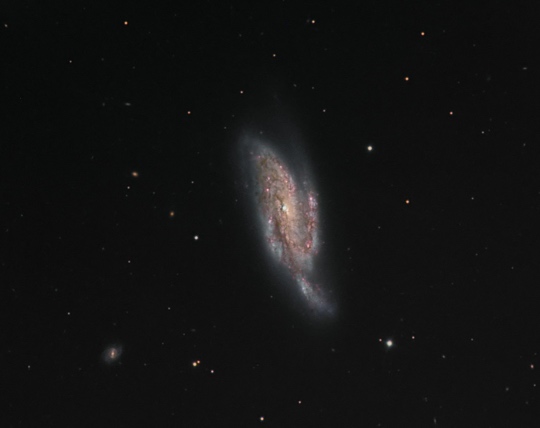 The major galaxies M81/82 and 108,109 and 101 in Ursa Major usually get all the attention but the constellation is filled with other interesting galaxies. One of the overlooked ones is NGC 4088. Classified as an intermediate spiral galaxy it forms a physical pair with NGC 4085. NGC 4088 was first discovered by William Herschel in 1788. The same observer found NGC 4085 the following year in 1789. Described as a grand design Spiral galaxy Halton Arp included it in his Atlas of Peculiar galaxies as Arp 18 because it appears to have a detached spiral arm. Both NGC 4088 and 4085 are members of the M109 group of galaxies. This group lying about 55 million light years away contains maybe 39 galaxies including M109. It is also known as the Ursa Major North group. Unusually the group contains no major elliptical galaxies. NGC 4088 and 4085 are at the front of this group at perhaps 50 million light years. Distances however to galaxies this close are notoriously unreliable if it is based on redshift because the peculiar motion of the galaxy maybe a substantial part of the Hubble flow. Recently NGC 4088 had a supernova (2009dd). Previous to that it had one in 1991 so it is a relatively prolific supernova generator. The image here shows Sn2009dd near the core of the galaxy. Visually NGC 4088 is bright enough to be seen in quite small telescopes, certainly in the 8-10” class. Larger telescopes will show much more detail and a series of observations made with a range of telescopes can be found at the DeepSkyForum.

An interesting set of drawings of NGC 4088 can be found Bertrand Laville's Extreme Deep Sky Drawings website. Another view is at the Astronomy Sketch of the Day website. NGC 4085 should be visible in 8-10” telescopes but is considerably fainter. It is also an edge on spiral. For those who like collecting lists NGC 4088 is part of the original Herschel 400.

The included PDF chart shows both of these galaxies.

There is a fine image showing both galaxies at Kai Wiechen's Deep Sky Astrophotography website.