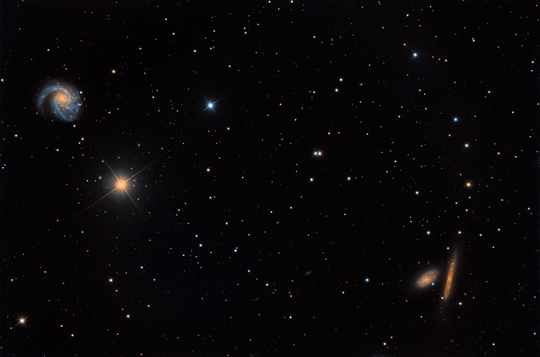 M99 hit the news recently because it had the second supernova this year found in a Messier galaxy, the first being M82. The supernova in this case never got that bright reaching only about 14th magnitude at maximum. First discovered by Pierre Mechain in 1781 it was added to Messier's last instalment of his catalogue of Nebulae and clusters. It is one of the faintest of the Messier objects and this is not helped by it being a face on spiral. It became famous as the second galaxy that Lord Rosse observed to have a spiral shape after M51 in 1846. Messier 99 is a standard grand design Spiral galaxy located at about 50 million light years from us. This has led to a morphological classification of SA(s)c. Although situated in the constellation of Coma M99 is actually part of the Virgo cluster, although there are some suspicions that it may be entering the cluster for the first time and is subject to some ram pressure stripping. Messier 99 does have the highest recession velocity of all the Messier galaxies. The galaxy also appears to have star formation going on at perhaps three times the expected rate for a galaxy of this time which could have been triggered by the interaction. This may account for the supernova. There have been three supernovae identified in M99 in the last century. There also appears to be a stream of gas linking it to the dark galaxy VIRGOHI21. This object appears to be a cloud of neutral hydrogen gas (HI) but its internal motions suggest that it may contain a lot of dark matter. However there are also some theories that suggest that this cloud is merely part of the tidal tail from M99. It is also possible that the distorting galaxy may be the lenticular galaxy NGC 4262. If this was the case then the encounter happened maybe 280 million years ago. Although not shown on our image the chart shows the location of NGC 4262 in relation to M99. A close up of M99 taken by the HST can be found here.