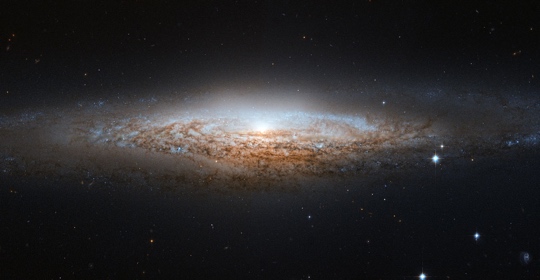 First discovered by William Herschel (who else) in 1788 NGC 2683 was nicknamed the UFO galaxy as its shape looked like the classic UFO saucer from early Sci-Fi movies. It is an edge on spiral galaxy with a boxy middle. Found in the fairly non-descript constellation of Lynx – not called because of any resemblance to the animal but because you would need the eyes of a Lynx to see any of its stars. Due to the angle at which it is seen it is not clear whether or not NGC 2362 is a normal or a barred spiral but many astronomers lean towards the latter designation. Although NGC 2362 is both smaller and less luminous than the Milky Way it does seem to have a very large number of globular clusters with about 300 known. Most of these globular clusters appear similar to those in our own galaxy although appears significantly younger at around 3 billion yeas which suggest a recent star formation (interaction) event. The galaxy also appears to have a low amount of neutral and molecular hydrogen and this leads to a currently low level of star formation. There is a fine close-up view of NGC 2683 taken by Hubble.

NGC 2683 is relatively close to us at a distance of about 16 million light years. This distance may however be an underestimate as more modern distance suggest it is at around 8 Mpc which would be 24 million light years. The nuclear bulge of NGC 2683 appears yellowish on images and this is due to its light passing through the dust in the spiral arms. NGC 2683 also appears to a boundary object between a LINER and a Seyfert Type 2, both of these are forms of AGN and suggest an active massive black hole at the centre of the galaxy. NGC 2683 lies in front of a large number of faint anonymous galaxies that are much further away. Interestingly NGC 2683 does not appear to be part of a group of galaxies but is a true field galaxy. NGC 2683 is by far the brightest galaxy in Lynx but seems to have been overlooked by many observers. It is part of the Herschel 400 list. NGC 2683 does appear in the WSDSOH Vol 4 and is number 47 in Steven O’Meara’s book of Hidden Treasures. Obviously O’Meara’s observations are done with a 4” telescope but the Webb observations with an 8” suggest that it should easily be visible with that size telescope although to see details a larger telescope will be needed. Walter Scott Houston does say it was easily visible in a 3” telescope.