The constellation of Taurus is not traditionally where you look for galaxies but it does in fact contain quite a number of NGC galaxies. Most are quite faint but there are a number within range of medium to large telescopes (here I class this as in the 30-50cm class range) under typical UK skies (i.e. poor). 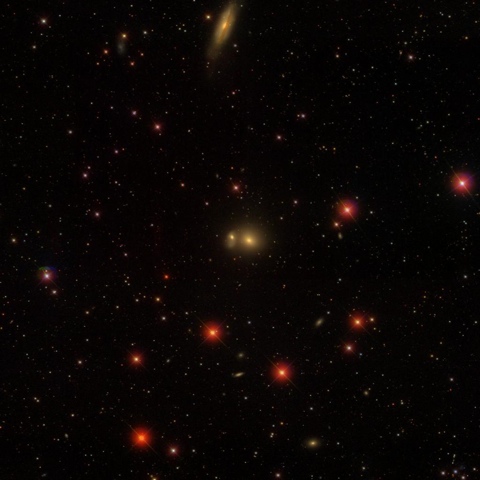 This image of the LGG 117 region was provided by the Sloan Sky Survey.

The brightest galaxies in this group are the interacting pair NGC 1587 and NGC 1588. First discovered by William Herschel in 1783 this pair will be a challenge. The brighter galaxy NGC 1587 is a peculiar elliptical and may be visible in 22cm however its companion NGC 1588 will be more of a challenge and will probably require at least 30-40 cm to separate out. The type of NGC 1588 may be questionable but is probably a peculiar elliptical as well. The deep images shown here from the Sloan Sky survey show that NGC 1587 appears to have shells and 1588 is clearly distorted. The distance to the pair has some variation but is about 40 Mpc or so. NGC 1587 itself is bright in X-rays. 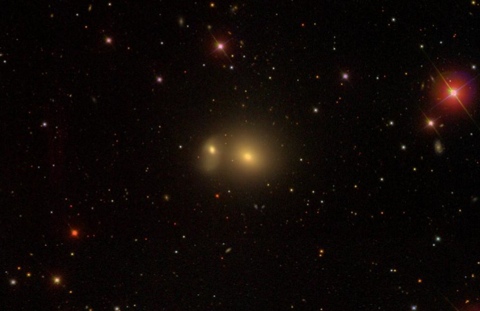 In the same medium power field is the edge on spiral galaxy NGC 1589. This was also discovered by William Herschel on the same night in December of 1783. NGC 1589 has had at least one supernova, the one in 2001 being discovered by Tom Boles and named as 2001eb. The distance to NGC 1589 is about 48 Mpc. The nucleus of NGC 1589 is classed as boxy and it will be unfortunately quite a challenge to see although Luginbuhl and Skiff report seeing it and 1587 with 15cm from a high dark site.