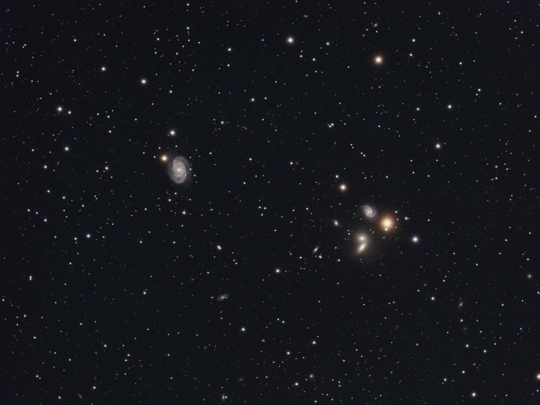 The 68th member of Paul Hickson’s catalogue of 100 compact groups unusually consists of five NGC objects, numbers 5353, 5354, 5350, 5358, 5355. NGC’s 5350, 5353, 5354 and 5355 were all discovered by William Herschel in 1788 using his 18.7” reflector whilst NGC 5358 was discovered by Stephan in 1880 using a 31" reflector. This tight group of galaxies is well placed in Canes Venatici in late Spring and has the added bonus of the bright galaxy NGC 5371 nearby. The group is located about 8 degrees south east of the Whirlpool galaxy M51. NGC 5371 is not part of the group. As one of the brighter Hickson (HCG) groups most of the galaxies should be visible in a 22cm telescope under dark skies however probably 30cm+ will be needed to see the fainter members of the group. The group appears to be at a distance of about 100 million light years. Interestingly NGC 5371 is also at the same distance and appears to be physically associated with the HCG 68 group. If so this group of galaxies may contain over 20 galaxies. The whole group appears to lie on a filament of galaxies connecting the Coma cluster (AGC 1656) to the Virgo cluster. Hickson 68 and NGC 5371 make up the Big Lick Group. It is not clear why it should have be so named as this is after the town of Roanoke in Virginia which itself was named after the local salt pan. This may just be a case of people randomly attaching names to objects in the sky with no real association. A fine image and identification chart appears at the Distant Lights website. This also shows the many faint background galaxies in the same area. A nice sketch of the area can also be found on the ASOD website. Interestingly NGC 5371 is probably the same as NGC 5390 being a re-observation by John Herschel and a case of mistaken identity. NGC 5353 and NGC 5354 appear to be interacting and both galaxies are producing large amounts of radiation on the radio spectrum. Although NGC 5354 is classified as a lenticular galaxy, SA0, it does show a dust lane in deep images which would be unusual for this type of galaxy. They both show distortions arising from this interaction. It would appear that these galaxies are separated by only about 9kpc and are the process of merging. This merger should take place in the near future in astronomical terms. The other bright member of the group, NGC 5350, is also classified as a Type A Seyfert galaxy so it has an active galactic nucleus. This is altogether a fascinating group of galaxies that should repay study with both medium and large telescopes.'