The Quarterly Journal, and then the Deep-Sky Observer have been the main way of distributing observations for over 45 years.

The contents lists and editorials for The Deep-Sky Observer are available to read online. For a paper or PDF copy of latest edition why not join the Webb Deep-Sky Society?

Most of the early paper issues have now disappeared, but they survive in digital form and are available on our archive DVDs, USB flash drives, or as a download via WeTransfer.

Due to our international nature, the cost of postage and pricing in local currencies varies widely. To enquire about price, delivery or to order any of our publications please contact Webb Deep-Sky Society sales (sales@webbdeepsky.com).

We can take credit card payments via PayPal. No PayPal account is required, just let us know what you want and we'll send you an invoice to be paid online. 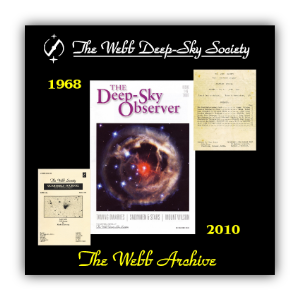 The Webb Archive DVD holds scans of all the Magazine and Journal Publications released by the Webb Society since the first Quarterly Journal in 1968 and some 250 people have contributed articles over the 40+ year period.

In 2007, The Webb Society celebrated its 40th anniversary. It was formed as a result of interest shown in early deep-sky columns by John Larard in The Astronomer magazine. Since the first Quarterly Journal (Vol 1 No 1) came out in June 1968 the Society has been constantly active and the ‘QJ’ (later to evolve into the Deep-Sky Observer) has been the main organ through which observations have been transmitted to enthusiasts all around the world.

The earliest editions of the Quarterly Journal were produced in small numbers and so there are very few complete sets in existence. In 2007, Tim Walker, the Society Webmaster, announced that he was willing to scan all the main Society publications from the beginning. This DVD is the result. It contains the complete contents of the Quarterly Journal/Deep-Sky Observer from June 1968 to mid-2010. This required hundreds of hours of work at the scanner by Tim, involving some 6,500 pages, and the committee is extremely grateful to him for his dedicated effort.

The result is that everyone can now enjoy the reports of observers who were into the deep-sky at an epoch when the use of CCD camera or laptop was not an option, catalogues were large, heavy volumes, and correspondence was by pen and paper.

(Note 1 - This DVD holds scans of all the Magazine and Journal Publications released by the Webb Society since the first quarterly Journal in 1968 up to mid-2010, up to and including DSO152)

Price is £16 (before P&P) and available on either a DVD, USB flash drive, or as a download via WeTransfer. 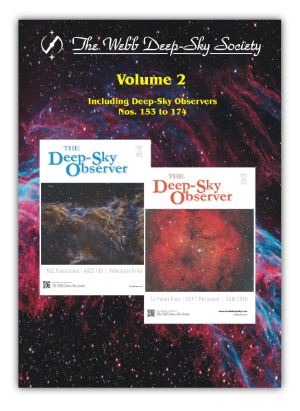 The Webb Archive DVD Volume 2 contains PDF copies of DSO Issues 153–174, with later issues in full colour. There is also a complete set of the Double Star Section Circulars (DSSC) up to DSSC 25.

If you seeking new objects to observe or image, read in-depth reports of unusual objects, or just gain an insight into deep sky observing, then this archive is for you.

Price is £6 (before P&P) and available on either a DVD, USB flash drive, or as a download via WeTransfer.

An index for the Quarterly Journal issues 1 to 100 is available as a PDF download. It was then combined with the Deep-Sky Observer.

A complete index of the Quarterly Journal and the Deep-Sky Observer is available to download in a PDF.

The Book Review Master Index is also available as a PDF download.

It has been brought to my attention that there are a number of transcription errors in the Ron J. Morales article on the 'NGC 1550 Region in Taurus'. I have attached a corrected version of this article. Most of these articles are scanned and the OCR software sometimes has issues with the material. I apologise for this production error.