This interactive image of the NGC 2713 group was provided by the Sloan Digital Sky Survey using Aladin Sky Atlas. This finder chart should help you locate these galaxies.

First discovered by Albert Marth in 1864 using William Lassell’s 48" Speculum metal telescope from Malta the pair of galaxies NGC 2713 and NGC 2716 will provide an interesting challenge for deep sky observers from mid northern climes. The pair was also independently rediscovered by d’Arrest in 1866.

Residing in the head of Hydra NGC 2713 appears to form a physical pair with the nearby galaxy NGC 2716. The pair reside approximately 53 Mpc from the earth. NGC 2713 itself is a barred spiral that is highly inclined to our line of sight. NGC 2716 is a bit more difficult to classify but appears to be either an elliptical or a lenticular galaxy, recent classifications tend to the SB0 classification. NGC 2713 is classified as a radio galaxy, possibly from interactions with its companion. It may also host a weak AGN. It was also host to a type 1 supernova in 1968.

The nearby galaxy IC 2426 may also be associated with this pair as its radial velocity is very similar, and in fact the trio is classified as a compact group number 83 in the catalogue compact groups from the UGZ. IC 2426 at 15th mag is going to be a lot more difficult to see but should fit in the same field as the others with a medium power eyepiece (say 220x) 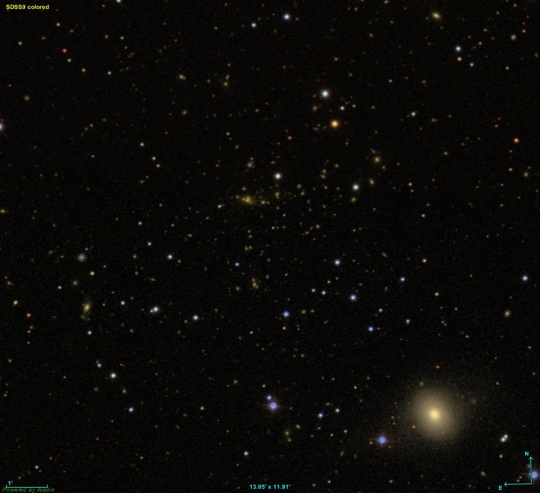 This interactive image of AGC 732 was provided by the Sloan Sky Survey.

Owners of very large telescopes might like to see if they can see any of the components of the galaxy cluster AGC 732 just to the north of NGC 2716. The brightest galaxies here would be around 17th magnitude so I suspect they are going to be on the edge for all but the largest amateur telescopes.