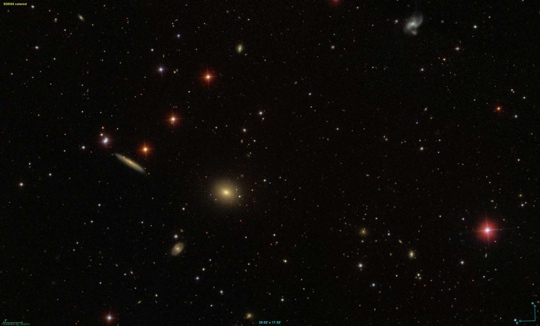 This image was provided by the Sloan Sky Survey, and this finder chart should help you locate these galaxies.

The constellation of Cancer is often overlooked except as a stepping stone between the two richer constellations, in terms of deep sky objects, of Gemini and Leo and if it is considered at all it is for the two open clusters M44 and M67.

The constellation does however have its fair smattering of faint galaxies. Indeed there are over 100 galaxies catalogued in the NGC alone and whilst those hidden amongst the stars of M44 have often been mentioned there is a nice group around NGC 2749.

NGC 2749 itself is a 12th magnitude elliptical galaxy (E2) discovered by d’Arrest in 1862 and is perhaps the brightest of the group. NGC 2745 and 2747 were discovered by Marth along with NGC 2751 and 2752. Remember though that Marth was using Lassell’s 40” speculum metal reflector from Malta so these galaxies are going to be a challenge. Oddly the other galaxy in the field NGC 2744 was discovered by William Herschel so how he missed 2749 must be a mystery as it is a brighter galaxy.

The group is listed as number 202 in the WBL catalogue of poor galaxy clusters with a total of 5 galaxies counted as part of the cluster. These are NGC 2745, 2749, 2747, 2751 and 2752. The group would appear to be at about 192 million light years from us. Interestingly 2744 was not counted by WBL to be part of the group despite showing obvious signs of interaction. With the exception of NGC 2749 all the other galaxies in the group appear to be either spirals or lenticular (2745).

Although the WBL catalogue does not include NGC 2744 within the group more recent papers suggest that in fact NGC 2749 and NGC 2744 are an interacting pair. Here NGC 2749 is classified as a low luminosity AGN (LLAGN). Fundamentally this is not that dissimilar to the activity (or lack of it) we see from the centre of our own galaxy.

The faintness of these galaxies suggests that probably a 30cm telescope will be needed to see NGC 2749 and probably 40cm to find the others, although they will require a dark sky. There seem to be few images of this group so they may also make an interesting target for imagers. The classic references such as NSOG and L&S do not make much mention of the galaxies in this area apart from NGC 2479.