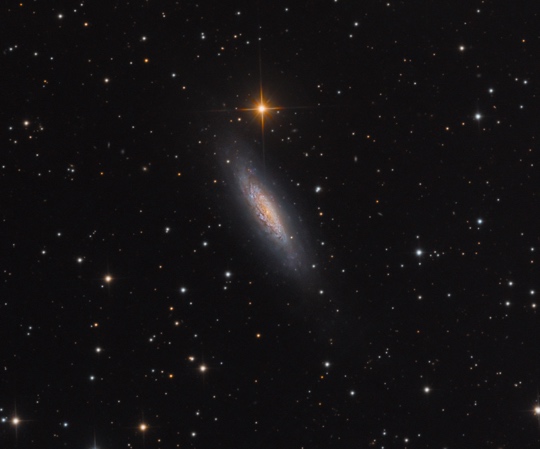 This image was provided by Bob and Janice Fera. I’d recommend you follow the link to see the rest of their work. You can click on the image for a larger version.

The bright nights of July from mid northern latitudes make hunting faint galaxies a bit of a challenge so this month’s object is a little brighter than previous GOMs.

NGC 6503 was discovered by Arthur von Auwers in 1854 using a 2.6” refractor whilst he was a student which is sort of odd then as to why if it was so bright it was missed by William Herschel. NGC 6503 was one of two NGC objects Auwers’s discovered, the other being NGC 4402.

NGC 6503’s Dreyer code of pF L mE *9 f4 however suggest that it’s large size may have been an issue as perhaps would have been its location close to the pole. Modern references describe this as a high surface brightness object visible in small instruments. NGC 6503 is classified as a dwarf spiral galaxy (SA(s)cd) seen nearly edge on. It is about 30000 light years across and maybe 18 million light years away. This makes it about a third of the size of our Milky Way galaxy. NGC 6503 is an isolated galaxy lying on the edge of the Local Void. The Local Void itself maybe 150 million light years across and contains few stars and galaxies. NGC 6503 appears to have almost no central bulge and a large halo. Its nucleus however is a weak form of AGN known as a LINER which may come from a starved black hole. Here LINER stands for Low Ionization nuclear Emitting Region. Something like 33% of galaxies in our local area appear to have this kind of spectra. There’s rather nice recent image of NGC 6503 taken by Hubble. The Hubble image shows the bright blue stars and HII regions of an active star forming galaxy.

The location of this galaxy caused it to be named by Steve O’Meara in his Hidden Treasures book the Lost-in-Space galaxy. I am not sure if this nickname will stick. Recent observations however with the Subaru telescope suggest it might not be quite as alone as it appears to have a dwarf companion named NGC 6503-d1. This new galaxy maybe a dwarf Spheroidal and although its location is uncertain it is most likely associated with NGC 6503.

A sketch of NGC 6503 with a 20cm telescope can be found on Astronomy Sketch of the Day. And there’s an interesting, although perhaps over processed, amateur image too.