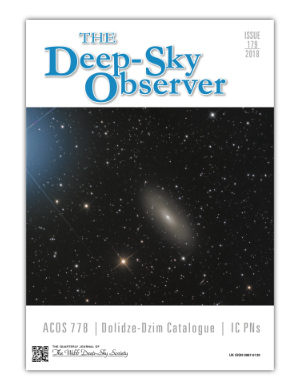 A Visual Survey of IC Planetary Nebulae by Stewart Moore

ACOS 778 in Centaurus by Ron Morales

The Dolidze-Dzimselejsvili Catalogue of Possible Open Clusters by Patrick Maloney

Object of the Season: Galaxy NGC 253 in Sculptor by Wolfgang Steinicke

Book Review: ‘Pearls of the Southern Sky’ by Steve Rayner

An Observation of Jonckheere 320 by Stewart Moore

I apologise for the lateness of DSO 179 but we have been a bit short of material in getting this out.

Unfortunately Bob has not had time to do his usual AGM report and I did not have his skills to create a report from the AGM materials and as such we have a minimal report in this issue. I am sorry for those that did not make the meeting that they will not be able to see a summary of the excellent talks.

We also have some changes in the committee as Andrew Robertson felt that he could no longer make meetings and has stood down. We would like to thank him for his time over the last few years and appreciate that he will still help out when required. He does spend a lot of time organising the two main star parties in the UK which we all benefit from when the weather allows (not often enough!!)

At the last committee meeting we decided that given the way that deep sky observing is changing we should look at the structure of the committee and look for a replacement for Andrew to help us understand what is required to attract more members of the imaging community. Whilst this may cause some consternation amongst the diehards in the visual community we are not going to abandon that (as most members of the committee are visual observers) nor are we going to publish articles on how to process images as this topic is well covered by all other magazines on the market. However we would like to attract more images as we can now produce in full colour and images of out of the way objects are to be welcomed.

I suspect that the article issue may be down to the appalling weather we have had over the last few years in the UK and it is very difficult now to do projects as you never get the time. As an example I usually go down to dark skies in Devon once a year and over the last two years (14 nights) we have had maybe 3 clear hours in total. It would seem that the lack of clear nights is also starting to have an impact on the numbers booking for star parties as well. It is difficult to go year after year and maybe not even set your telescope up.

The society has also made the decision not to go to the major trade shows this year as the turnouts last year were not good and the money made and members gained do not make it worthwhile. We will however have stands at both the Spring and Autumn Kelling Star Parties. We also have finalised the list of speakers for the AGM on the 2nd of June and hope to see many of you there. The running order has been updated on the website and on the Facebook/Twitter feeds when we have these confirmed.

We are also looking at our Yahoo group presence as we have had some issues with it going down lately. It usually comes back up after a day or so but with Yahoo being taken over the future of this must be under question. As such we are interested if people find this group useful and whether or not we need to look at starting our own forum off the website as many other groups do. There are two downsides to this. The first is that it will require more intervention from myself and James and, secondly, currently messages are pushed out and it would be interesting to know if the people who use this would be willing to log on to a site to see what is being said rather than having messages pushed out to their mail boxes. If there are strong opinions either way then please let us know and we can decide how we are going to go. This is a medium term project so nothing is going to happen in the short term.

In terms of sales items the society does have a number of new items for sale including the new Night Sky Observers Guide Volume 4: The Milky Way down to -54 and the Annals of the Deep Sky Volume 5 from Willmann-Bell as well as the Herschel 400 Guide from Alvin Huey and Magdha Streicher's Observing Delights. We hope to have the 2nd Volume of the Atlas of Open Clusters out by the end of the year as Mike Swan has been busy helping Bob Argyle with the charts for his new book on double stars to be published by CUP and that is taking his time currently.

It was disappointing to see the launch date for the JWST being pushed back to May 2020 with only a 70% chance of it being launched then. Although this is a very important mission it will undoubtedly now hit its budget cap and NASA will have to try and persuade a hostile congress to increase it with the likelihood now that if they get it then it will suck money from other missions. It is starting to look like $8 billion plus for a maximum 5 year mission is not good value.