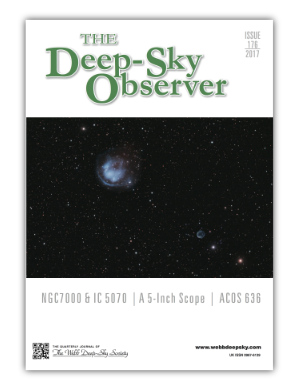 Fun with a 5-inch Scope by Michael Wood

The North American and the Pelican by Ian Geller

The UGC 3555 Group of Galaxies by Ron Morales

ACOS 636, A Visual Delight in Antila by Ron Morales

Object of the Season: Abell 21 by Wolfgang Steinicke

Next Object of the Season; the Veil Nebula by Wolfgang Steinicke

NGC 5222: an Interesting History by Owen Brazell and Andrew Robertson

As the society reaches its 50 year we are seeing a change in printing costs which means that for the first time we will be able to print DSO in full colour throughout. This will obviously only make sense if we get enough contributions with colour images and I do not intend to follow the example of some of the UK commercial magazines and print full colour Hubble images to pad the page count.

Unfortunately, with DSO at the moment we are living issue to issue with contributions and I no longer have a store to use. This is obviously not an ideal situation. I do understand that more and more people post their observing reports via Internet forums or via webpages but as has been mentioned before these can prove to be transitory locations, even if we take into account the use of the Wayback site for retrieving old websites.

We also see a rise in people using Facebook which is an even more transitory method. As I have mentioned before without being accused of being the Katie Hopkins of the astronomy world the use of Facebook for self-publicity rather than for real contributions seems to be increasing. It may be for self-preservation that I have to leave Facebook for my sanity. I am hoping that I can transfer the Page site to James.

I also apologise for the lateness of DSO 176 but Don who does the layout has been unwell. I had hoped to have it out before the Annual Meeting but that now seems unlikely. It is fantastic to see the Society membership pass the 300 mark again so hopefully we will get some new contributions in.

The Society does have some new publications out including the first part of the Open Cluster Atlas by Mike Swan and that will be available through the website and at meetings. Double Star Section Circular 25 has also been released and can be downloaded from the website.

We will be having a stand at the IAS again this year although it seems to be dumbing down at lot and now that they have gone into partnership with Sky at Night magazine I expect to see it go even further down market. We also hope to be at the North West Astronomy Festival/Forum this year on the 1/2nd July. I hope to be there along with Steve despite flying back from an observing trip to La Palma the day before with Andrew Robertson. We also hope to have a stand again at the Kelling Autumn Star Party as this is the biggest astronomy event in the UK after Astrofest and the IAS.

The observing front has been interesting this year with many comets around but also a bright supernova in NGC 6946 that hopefully many of you managed to catch before twilight overwhelmed the skies. Bob and I continue to provide the Double Star of the Month (DSOM) and Galaxy of the Month (GOM) on the website and hopefully many of you find this useful as it does take us time to research and put together. Do people find the lists I put together for Skytools, AstroPlanner and DSP useful?

I was pleased that apparently for once the French were happy with something that happened in the UK with David Reynolds review of AstroSurf in the magazine. David did mention that they had a couple of books on astronomical drawing out called Astrodessin. I did buy the set and found them very interesting in terms of the drawing technology and the size of telescope they use. It puts us here in the UK into the shade. David intends at some point to write a review of these books.

Speaking of books there appears to be a new atlas of galaxies coming out from CUP. Originally due in July it has now slipped (what a surprise) to August, and I would not be surprised to see it slip further.

There is also a new book on William Herschel due out later this year from Springer. This is another book whose publication date has slipped by a year, so I have no confidence in any publication dates given but it is another due in August. I believe there is a chapter in it written by Wolfgang.

Wolfgang himself is writing a book on the Herschels but I am not sure of any publication date. There are rumours of a companion to the Interstellarum Atlas published by CUP but I am guessing if this happens we are talking late 2018. There is nothing else much due from Springer. The book on Bright and Dark Nebulae by Richard Wilds seems to have disappeared from their website so I assume that is not happening.

On the software side not much has happened.

The popular freeware program Carte du Ciels (CdC) has released version 4 and the main interest for deep sky observers is the inclusion of the 5 million galaxy HyperLEDA (PGC) catalogue. I do find it a clumsy program to use but it will have its uses.

I am afraid there are still no signs of SkyTools 4 and I am beginning to wonder if it will be out this year or will slip to 2018 (or at all). My concern here is that the longer it is left the more out of date it will become with the GAIA DR 2 release due later this year that will almost certainly invalidate most of his stellar database and I am guessing that most of his deepsky databases were made some time ago which may invalidate them as well. I think his concentration on imaging and EAA astronomy may have been more complex than he expected and trying to hit a home run with the software may have caused more issues than he expected.

I hope at some time to write a review of the new Nexus DSC. I know I have said this before and I have SN 25 but lack of clear skies has meant that the few we get have been concentrating on the tools that I know work. I also get very jealous when you hear reports of the Texas Star Party and five or six clear nights. Here we would be lucky to get one.