It has come to our attention that a relatively small number of DSOs that have been despatched may have been printed with 2 or more blank pages.

If you receive one of these please contact Steve Rayner and he will arrange for a replacement copy to be sent out. 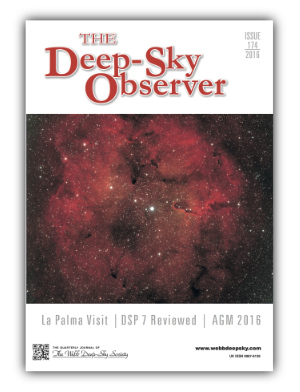 Next Object of the Season: PN Abell 21 by Wolfgang Steinicke

Object of the Season: NGC 7009 by Wolfgang Steinicke

As I write this with thick fog blanketing much of southern England at the end of 2016, a year which has seen several momentous events in the political space, has also had an impact on astronomy in the UK with prices for equipment rising now by almost 20%. If Article 50 is really triggered at the end of March 2017 then I expect a further fall in the value of the GBP (£) and a rise in prices.

On the astronomy front although there has been some clear weather over the autumn season in general the skies have been not very transparent so the focus at many of the star parties that I have been at has been on brighter objects. Although we did pick up both Simeis 22 and Bohn-Vintense 5-1 with Andrews Robertson’s 24-inch at the Haw Wood star party along with the supernova remnant Cas A. I had picked up Simeis 22 with my 22-inch earlier in the season. Faint galaxy hunting however was not the order of the day.

The Society also had a very successful IAS show, mostly from selling Willmann-Bell books, probably our best ever show and we also got several new members. The show itself I thought was not as well attended as in 2015 with perhaps 20% less stands than last year. It is interesting to see that several of the main retailers in the UK no longer feel it is worth going to these shows. We will have to see if there is one in 2017 and see if we feel it is worth going. It is worth noting that despite the increased turnover we do not make a profit going to these shows, it is purely to raise our profile.

It is odd that people in the UK are attracted to US forums yet do not seem to either know about, or show in any interest in, the Webb Society. It is certainly true that we seem to have an old-fashioned reputation in a world that would appear to be moving more and more into EAA (Electronically Assisted Astronomy, which covers video astronomy and electronic eyepieces) and CCD imaging. This can be seen in the early development reports for SkyTools 4 where more effort appears to be being put into support for that side of astronomy than for old style visual observing.

Reading reports on the UK SGL forum seems to suggest that there is an ever-increasing number of large telescopes greater than 20-inch aperture but it is not clear what these are being used for as the knowledge of astronomy of many of their users appears to be fairly low, certainly in the deep sky area. This is of course very sad but there appears little interest in moving outside the forums to learn more. Even more challenging are the reports on these forums of what I would regard as very challenging objects seen (allegedly) with very small instruments which gathers a whole new range of issues. The worry here is that there is either a lot of averted imagination going on or fabrication to get noticed as part of the elite. I hope not the latter as the hobby is really not that competitive.

On the book front Willmann-Bell brought out Volume 4 of the Annals of the Deep Sky and Springer brought out Martin Griffiths’ book on Observing Nebulae. We hope to have a review of the latter in due course but my personal feeling is that it is a typical Springer book with poor layout and numerous errors. I keep hoping Springer will improve but these hopes seem dashed every time.

On the software front we have a review of Deep Sky Planner (DSP) 7 in this issue and since the review there has been a 7.1 update and a fix to some issues with the globular cluster catalogues where the Terzan and Palomar clusters were both a bit of a mess. Otherwise there has not been much movement in other software packages.

On the nomenclature front a discussion with Harold Corwin on the supplemental section of the Abell Catalogue (table 5) has led to his recommendation that all objects in that catalogue should be known as ACO S rather than AGC S and the same applies now to the main catalogue as that should be known as ACO rather than AGC. There appears now to be another galaxy catalogue (a radio one) that is gaining the traction with the AGC moniker. ACO stands for Abell, Corwin, Olowin (the authors of the 1989 galaxy cluster catalogue). This all arose because of observations planned for the Antila cluster of galaxies ACOS 636, for which an article is planned in the future. The supplemental table was for galaxy groups that were either not rich enough or too far away to be part of the main catalogue.

I apologise that the accounts are not included with the AGM report and this is for space reasons. They will appear in DSO 175.

As is becoming common now there appear to be some issues with DSO 174.

The image of Abell 85 attributed to Andrew Robertson on page 22 is of course not by him but is by Andrew Luck. My apologies to Andrew for the incorrect acknowledgement.

Also as note din Andrew Robertson’s piece in La Palma there should have been some sketches associated with that article that did not make it. These are included below. You can click on them for a larger version, or here to download a zip file of them all, it's about 3.2Mb.

Andrew also provided his tabulated logs for the trip which were too large for the DSO itself. You can download these observing logs in an Excel spreadsheet or as a PDF.