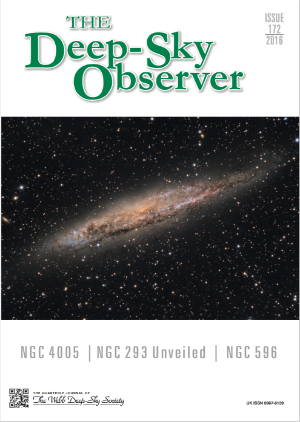 Object of the Season: Quasar 3C 273 in Virgo by Wolfgang Steinicke

Next Object of the Season: NGC 7009 by Wolfgang Steinicke

The NGC 4005 Group of Galaxies by Owen Brazell

Welcome to the second edition of the DSO for 2016. Although we have managed to fill this issue we are now very short of material going forward and the variation of material that I do have is also very narrow. It is time for you to get back to the keyboard and start producing more material again.

The society annual meeting in June was thought to be very good by those that attended but the numbers attending were way down. It takes a lot of effort from a number of people to organize these meetings and it is disappointing at the very least to see the turnouts we are having. This may also impact on whether traders think it is worth coming along if they are not making sales.

What would be useful to know is do you feel that it is the range of speakers or topics that is persuading people not to come or is it the time of year or location? Perhaps people are just either spaced out with meetings or becoming forgetful with age. It would be useful know what people think are the issues. If you have any feedback on these topics, then please let Stewart or myself know and we can move forward with the planning.

Next year is our 50th anniversary meeting and we are looking forward to having some special speakers. For interest PDF's of two of the talks given at the 2016 AGM are available for download from the website.

It will be interesting to see what the impact of Brexit will have on amateur astronomy in the UK. We have already seen the value of the pound against other currencies drop by 15%. Given many dealers have very narrow margins this will put the prices of all imported astronomical gear, which is most if not all of it, up by at least 15%, including, one would imagine, books and magazine subscriptions as most of these are now printed abroad. It will be interesting to see how the price increases impact sales. It is also likely that for the next few years at least people will have less available money to spend on non-essential items. Unusually for me the decision a few months ago to buy a smaller telescope for grab and go use, in this case a Takahashi Mewlon 210, looks foresighted. May have to live with my eyepiece collection though. No new models there.

As was seen at the June meeting the Society is now reselling Willmann-Bell books and we are expecting another delivery soon as the first batch pretty much sold out. Hopefully by the IAS we should have some more. The Society will be at the International Astronomy Show near Coventry on the 14th/15th October so any of you going please stop by and say hello.

We probably will not have a stand at Kelling Heath Autumn Star Party unless we can get some other volunteers to take material up and help man a stand. This site pretty much requires that you take your own table and after the weather in April your own waterproof gazebo as well. Unfortunately most of us that go the star party go for the astronomy and usually have cars packed with observing gear so we don't have a lot of room for other materials.

We are also looking at whether or not to print some of the other Alvin Huey guides. There has been some discussion of trying to produce a booklet of the existing Galaxy of the Month series from the website. Is this something people might be interested in?

As was noted in the last editorial there are currently four books on deep sky astronomy due out but so far there has been no sign of any of them. These are Observe Nebulae by Martin Griffiths published by Springer, Observing Bright and Dark Nebulae by Richard Wilds also by Springer and the second edition of the Caldwell Objects by O'Meara published by CUP. There is a rumour that the Caldwell book originally slated for September 2016 may come in early August. A related book is on Astro-tourism called the Million Star Hotel by Bob Mizon. This is currently expected in early August. Volume four of the Annals of the Deep Sky by Willmann-Bell is expected by the end of the year, maybe. I am not aware of any other books on deep sky observing due imminently. If you know of something please let me know.

Not much news on the software front either. As noted Deep Space Planner 7 is now out and we hope to have a review of it in DSO 173. No signs yet of SkyTools 4 and one guesses that with the expected release of the first Gaia Dataset in September then there may be updates to other programs to allow the use of that. James has uploaded lists for the popular SkyTools program to the website for both the OOTW lists from the Deep Sky Forum and for the Galaxy of the Month. Maybe we should do one for the double star of the month as well. These are free downloads.

On the equipment front it seems that Farpoint Astro has released a UHC and OIII type filter that are getting good reviews on the US forums. I am not sure if any UK dealers intend to carry these items though.

Unfortunately, in DSO 172 a couple of images that should have made it in did not.

One was an image of NGC 5714 and 5614 for Andrew Robertson’s article. Unfortunately, these were replaced by an extra copy of the K-327 drawing. This was on page 6 and should have been figure 4. 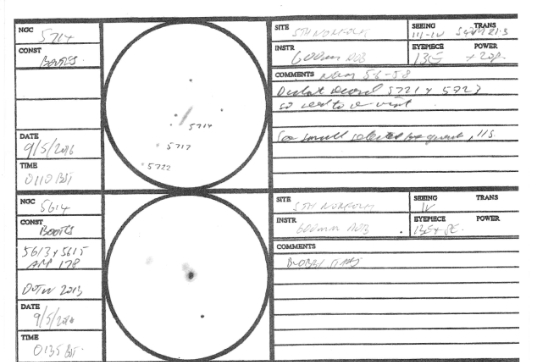 The other was a labelled image from Yann Pothier’s article which may have helped in the NGC 295 story also did not make it in. 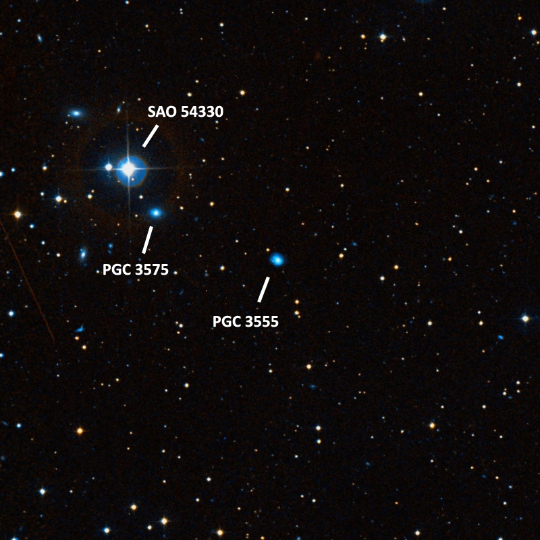 Our apologies for any confusion this has caused.