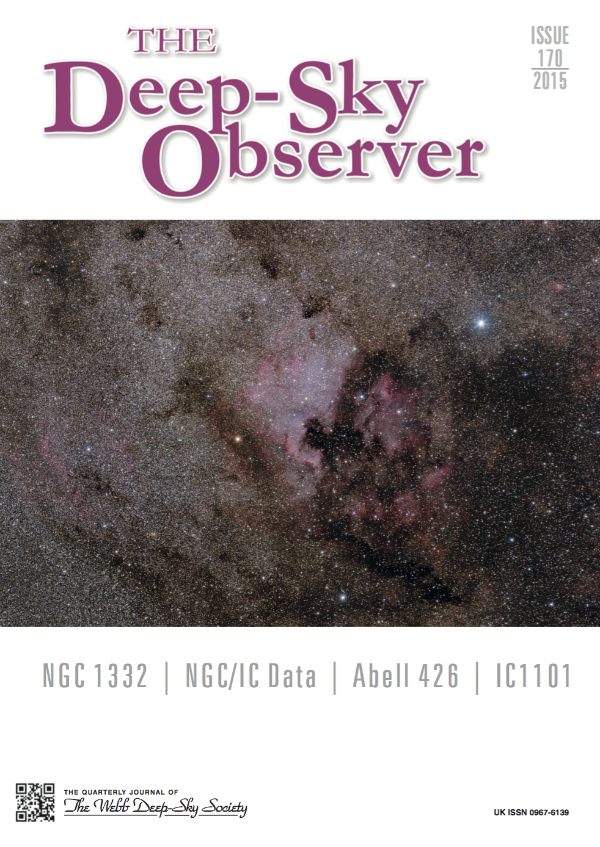 The NGC 1332 Group of Galaxies in Eridanus by Ron Morales

The First Scientific Biography of Lord Rosse by Wolfgang Steinicke

The Grave of T.W. Webb by Stewart Moore

Object of the Season: NGC 1 and 2 in Pegasus by Wolfgang Steinicke

Where to Get Reliable NGC/IC Data? Wolfgang Steinicke

Book Review: “A Journey Through the Universe” by Ian Morrison, review by Andrew Robertson

As I sit here again looking at what seems an interminable run of cloudy skies along with associated gales and rain it does make you wonder why we do astronomy in a climate such as the UK. There also does seem to be a law that when it is clear the Moon is in the sky which does not help much either. However, despite this, it is worth noting that the Webb Society will be celebrating its 50th year in 2017 and we are planning some impressive speakers for the annual meeting along with some new Webb Society items to celebrate the occasion. The full list of speakers is also up on the website for the 2016 meeting and that may be something to look forward to in the dark wet days ahead. You will also notice that the society can take PayPal for membership and for items at trade shows. We did have a very successful time at the IAS and hopefully we will be there again next year if it happens. The next two events that we expect to have a stand at are the BAA DSS meeting in Rugby on February 27 and the Spring Equinox star party in April.

You will note that Patrick Maloney's article in the last issue of DSO stirred up some controversy on where to get historical information for deep sky objects and Wolfgang has written a short piece on that for this issue. Suffice to say that using the NGC/IC Project website in the US is no longer the preferred site to get up-to-date historical information. It is still useful for the original source article downloads but much of the rest is out of date. The definitive site for historical information on the NGC is now Wolfgang’s site, or Harold Corwin’s site. If you want observations of all NGC objects (and many IC ones) then Steve Gottlieb’s site is also one to look to.

James would still like new material for the website so if you have anything please let him have it. There have also been some discussions on the images that we use on the website and in DSO in that these images come from certain sources that also push them out to all other magazines so often images that we publish are seen elsewhere. This is obviously an issue but the other magazines in general pay for material and we don’t so I am not sure that we can enforce a policy that if you send images to us then you can’t send them elsewhere. I know some committee members have strong views on this and if you do then again I would like to hear them. I must admit I have not had a lot of CCD stuff recently and would again reiterate that we are not against CCD articles per-se as long as they tell a story and are not just about how an image was processed. Most other magazines already cater for that.

I mentioned some new books coming out. The Steve Coe book Deep Sky Observing an Astronomical Tour (Springer) appears to be delayed but may be out after Christmas (not great timing) and Steven O'Meara appears to have a second edition of his book on the Caldwell Objects by CUP due next April. Hopefully this will be better than his second edition of the Messier Objects book.

On the equipment side I understand that TeleVue will be bringing out three new focal lengths in the DeLite series in the new year but there are so far no indications what they may be. I did try the 7mm and felt that the colour rendition was very good but the magnification was perhaps too high with such a small focal length for an undriven telescope, especially with the small (by current standards) AFOV. There are also a new range of wide field eyepieces from Vixen and also yet another range from Explore Scientific. If anybody has any experience with these then I would certainly be interested to know. There does seem to be a range of new filters marketed under a variety of brand names coming from the same Chinese source. There are conflicting views on the quality of these from the Cloudy Nights (CN) groups. This, however, does not seem now to be restricted to Chinese brands as apparently Lumicon switched to a new supplier for their UHC filters and have had quality control issues.