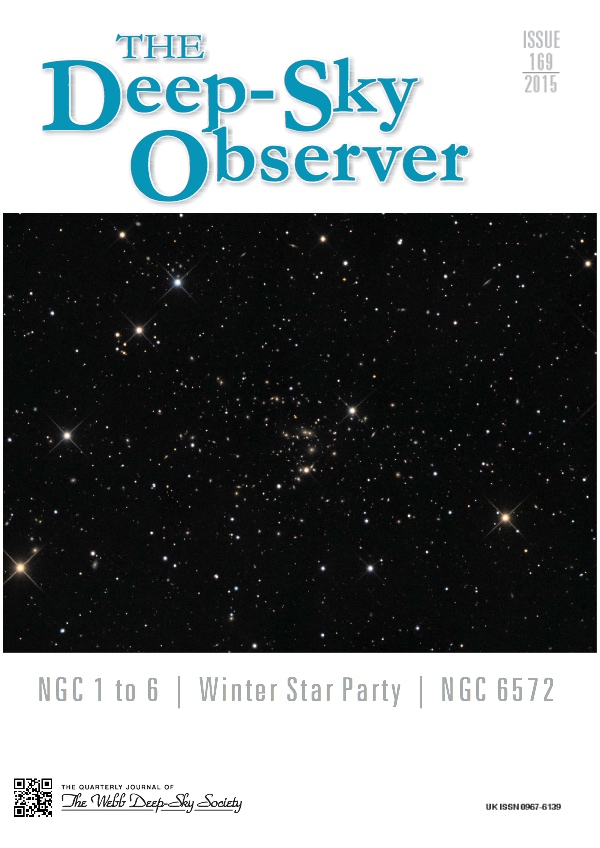 NGC - The First Half Dozen by Patrick Maloney

Object of the Season: NGC 6572 Planetary Nebula in Ophiuchus by Wolfgang Steinicke

Next Object of the Season: NGC 1501 in Camelopardalis by Wolfgang Steinicke

I have had some queries recently about whether DSO is getting smaller as it seems thinner. The answer to this is no. DSO remains at 32 pages including the cover. The paper maybe thinner now we are using different printers. The reason we keep it at this size is because of postage costs. If we went to more pages we would go up a cost band which would be uneconomic.

The Society had a very successful annual meeting in Cambridge and we are now planning next years which will again be in June at the IOA. 2017 will be a special year for the society as we will be celebrating 50 years and we are looking to make the 2017 annual meeting a special event. We also elected two new committee members in Jon Gale and Andrew Robertson to the committee. By the time you get this magazine the society will have had a stand at the International Astronomy Show and hopefully will have gained some new members.

With the autumn season now upon us hopefully the blues of a poor spring season will go away. For the first time at the Kelling Star Party in a long time I got almost three clear nights observing with the 22-inch. The skies were not the most transparent on a few of them but with this in mind I spent a lot of time observing planetary nebulae but on the last night the transparency was much better and I got some good observing of several galaxy groups in Andromeda as well as having a look at some southern objects in Sagittarius. Hopefully there will more clear nights coming up.I did note however that the star party which is perhaps 500 people had more imagers than visual observers. Although imaging has its place and in many ways has brought many more people into the hobby the poor light discipline of many imagers at these events with very bright red torches and unshielded lights makes it very difficult when hunting faint objects as it is quite difficult to keep dark adapted. It would be a shame if the visual observers need to find a separate site to observe from and education and enforcement is now seriously needed at large gatherings.

On the equipment front I note that TeleVue have released a new range of smaller more economical eyepieces, although economical may be a bit of a misnomer as they are only perhaps £30 cheaper than the Delos range. They have quite a small field of view at 65 degrees but good eye relief. The field size makes them perhaps impractical for undriven telescopes. They are much smaller than the Delos/Ethos series and they did show good colour on some of the double stars. The range is quite limited at the moment with only three focal lengths. I note that there are now quite a new filters coming out from the Chinese manufactures but they seem to vary widely in both quality and bandpass. It would appear that DGM who make the popular NPB filter in the US have also struggled to find a quality manufacturer and have at least for the moment stopped making this filter. It would be good to see a UK dealer pick up Lumicon but the market for this appears limited. This may become important as the spread of LED street lights may make it challenging to do deep sky observing from the suburbs. On the computer side I note there are no new programs out yet and nothing due in the next few months either. I keep hoping for the mythical Sky Tools 4 but I fear that it will be late 2016 before we will see it. On the plus side all my astronomical programs run just fine on Windows 10. A couple of new websites that maybe of interest to observers are Planetary Nebula Observations by Hilary Jones and Project BAfK. I can't remember if I have mentioned this one before either which is a colour atlas of ring galaxies.

On the book side there appears to be a new version of Steve Coe's Deep Sky Observing, The Astronomical Tour due out in November. The first edition was quite good so I am looking forward to this one. I have also been interested in The Complex Lives of Star Clusters by David Stevenson published by Springer. I note as well there is a completely revised version of the Cambridge Double Star Atlas by Bruce MacEvoy due out in November as well. The first edition of this was well received and has been out of print now for some time. If you are aware of any other books that I have not seen then please let me know.