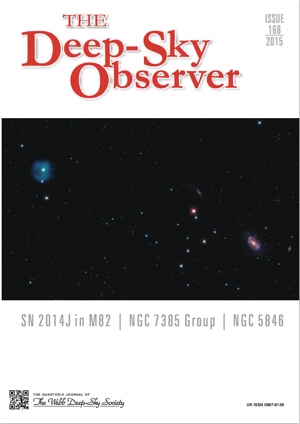 The NGC 5846 Region of Galaxies in Virgo by Ron Morales

Object of the Season: NGC 4449 Irregular Galaxy in CVn by Wolfgang Steinicke

Next Object of the Season: NGC 1 & 2 Galaxy Pair in Pegasus by Wolfgang Steinicke

As usual I seem to start most editorials with an apology. I do get quite a few articles which people may not see in print quickly. This is because we have to try and fit what we have in the limited page space we have available. In some ways it would be nice to expand the magazine but postal costs if we went bigger would be prohibitive so we are restricted to the page count we have. This means that if material does not fit it may be several issues before it can get in. It does not mean that I have forgotten about the material. If it has not appeared in four DSOs since you sent it then please drop me a line. We hope to get this edition of the magazine out at or around the AGM so hopefully I will see many of you there as we have a good line up of speakers including our first foray into amateur spectroscopy. This appears to be a growing area of interest for amateurs. Something that would not have been thought possible when the society was founded and amateurs with relatively small telescopes can now get spectra of novae and even supernovae. Speaking of this the society will be 50 years old in 2017 and we are looking to celebrate in the usual style. If you have any ideas about who or what we should do see Stewart Moore or myself. In article terms please keep them coming so I have a balance of what to use. It would be nice to have more images to accompany articles as well. Remember now we have the PDF version I can do more internal images that will be colour in that format.

We have had very strange weather in the UK yet again this Spring with most clear nights falling when the moon is full. We have also not had a lot of rain but from the astronomy point of view a lot of cloudy skies. Depending where you are we are also being impacted more and more by aircraft contrails which provide a permanent high haze. This means that doing project based astronomy, certainly from the visual point of view has been a challenge. You can see why more and more people are moving to imaging and using remote telescopes to do their astronomy as it means you have a much longer window per month to actually do something. At star parties I do feel like something of a dinosaur as a visual observer. At a recent star party out of thirty people maybe only 4 were actually looking through their telescopes. The rest were imaging. Although we do see and hear about larger telescopes at star parties here in the UK. I am not sure what people are doing as there seem to be few reports. Maybe they just circulate information amongst a group of friends.

After the last issue went to press a couple of interesting events happened in the publishing world. Willmann-Bell started a new series of books called Annals of the Deep Sky. The first two volumes were published this year and the hope is to have perhaps 12- 20 volumes over the next few years. I hope that we would see this series completed but with the next volume slated for 2016 then we are looking at 6-10 years for the series even at 2 volumes a year. This series should be seen as an update to Burnham’s Celestial Handbook rather than an enhanced NSOG. I do find it interesting that to criticize Burnham’s on US forums is very much like criticizing the Bible or Apple Mac's you would get pilloried by the fanatical devotees.

The second is a set of charts to help finding deep sky objects. This was also described on the stargazers’ lounge forum. It is an interesting project.

I was also asked to mention the deepsky log site. I understand it is going to have a major makeover in August 2015 so worth looking out for. We may have an article on it at that time.