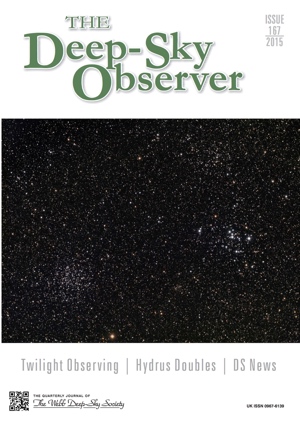 Next Object of the Season: NGC 2163 in Ophiuchus by Wolfgang Steinicke

What Makes for a Good Double? Peter Morris

Observations of Some Hydrus Double Stars by Magda Streicher

Yet again I sit here writing an editorial halfway through the spring observing season with what seems to be the endless run of poor weather stopping much in the way of observing happening. There are howling gales outside the window and rain hammering down. There are many times now where I think of selling up the telescopes and going into another hobby as one seems to need endless hope to do astronomy in the UK and then watching that hope being dashed year on year does eventually get you down. You always think it must change but it doesn't. This may be the way of the future with global climate change. I think that although it is probably still possible to get nights to find the brighter Messier and NGC objects to go fainter seems to rely on increasingly rare clear nights. The increase in air traffic and the contrails they produce are also impacting on what we can see, at least from the UK. I was interested in some discussions with Ron Morales in that he rarely observes when the humidity is above 40%. Here we would dream of that. Many are the nights when I have been observing that the telescope shrouds are running with water and without a secondary dew heater no observing would take place. There are also increasing numbers of nights when even the primary dews up!!. It would seem imaging is the way forward and possibly remote imaging as Nick James discusses in the AGM report. We certainly need more images to brighten up the pages. At the recent British Astronomical Association Deep Sky Section meeting it was interesting to note that most of the talks related to imaging in one way or another. I was interested to note the turnout out at the main astronomy show this year in the UK were down with less vendors and less stuff for sale. Perhaps we are reaching some form of saturation in the market. I do note that the people that send observations in are mostly those who can observe at a moment's notice from their back gardens.

At the moment I mostly cover amateur work but would people be interested in seeing selected professional images if I cannot get enough images to accompany articles?

Just for interest and this is more a feeling than anything the society committee has discussed currently we have both a nebula and clusters and a galaxy section. There does not seem to be much feedback or material coming in on either as far as I know. Do people feel these sections are still relevant?

James Whinfrey has taken over the society website and has made a number of changes to the format and content. He would be delighted to receive any feedback on how people see this going. Bob and I would also be delighted to get any feedback on the double star of the month and the galaxy of the month columns. If you have any observations of these then please let either him, myself or James have them so they can be added to the articles.

The society AGM is going to be held at the usual place at the IOA with an international cast (just to wind up UKIP) and I hope to see many of you there. See the web page for the program and any updates.