NGC 7619 and the Pegasus I Galaxy Group 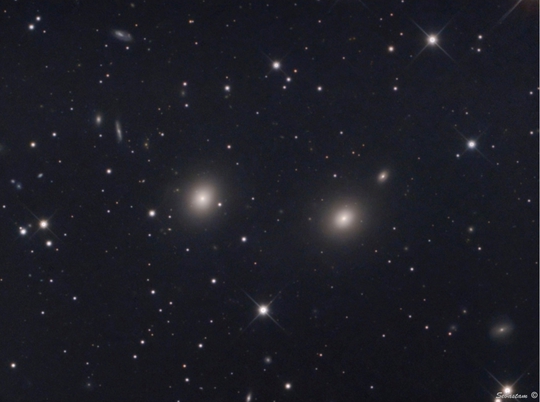 Image Courtesy of Sebastam, France. For more images from Sebastam please visit his website. You can click on image for a high resolution version, a Megastar© finder chart of NGC 7626 & NGC7619 can be downloaded.

X-Ray observations show bright shock fronts in each galaxy which are part of the merging process. X-ray observations of NGC 7619 also shows a tail of material stripped out from it, presumably by ram pressure from the intra cluster medium, as it falls into the cluster around NGC 7626. Both NGC 7626 and 7619 are radio sources with NGC 7626 being the more regular with bipolar jets.

The Pegasus I cluster itself contains perhaps 13 galaxies at a distance of perhaps 53 Mpc. These numbers are slightly down from a paper in 1976 by Rood which suggested there were perhaps 23 or so galaxies in this group. This maybe be due to either improved radial velocities for the galaxies themselves which separated them from the main cluster galaxies or the large angular diameter of the group of about 6.7 degrees which meant that perhaps not all have been surveyed.

NGC 7619 itself is classified as a generic elliptical galaxy with a classification of E, perhaps 2 or 3 given it is slightly ovoid and it is fairly bright.

NGC 7616 and 7626 should be visible in relatively small telescopes, although much larger ones may be required to pick up the fainter galaxies in this area.

In 1929 Milton Humason used the 100" at Mt Wilson to obtain a spectrum of NGC 7619 which showed the largest radial velocity seen at that time. The exposure time was 45 hours, which was about 5 night’s worth of observing for a single spectrum!! It was integral to Hubble’s famous paper on the distance-redshift relation later in 1929.

The Pegasus I galaxy group would appear to be a challenge for observers as despite the fact that the two main galaxies can be seen with relatively small telescopes being around 11th magnitude the rest will be a challenge for larger instruments and imagers. There are a lot of observations of the central two galaxies but not many of the others. Interestingly small galaxy groups like this did not make Webb Handbook Volume 5. The group however is covered in Alvin Huey’s guide to small galaxy groups which can be downloaded.