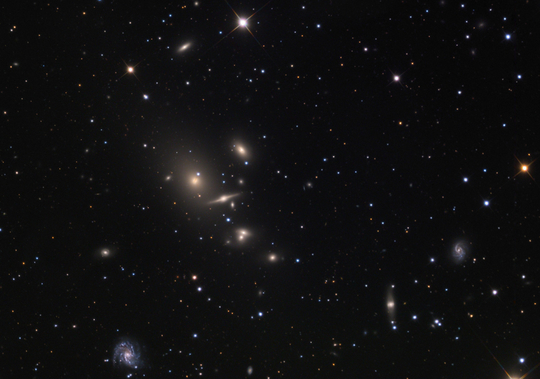 Abell 262 is part of the Perseus-Pisces chain of superclusters. This filament is one of the largest known structures in the Universe and extends from the Perseus clusters (Abell 426) through to the NGC 507 and NGC 363 groups in northern Pisces. Even at its current distance of 200 million light years this still spans 40 degrees of sky.

Abell 262 is unusual in that like the Hercules cluster the majority of its bright galaxies are spirals. The central galaxy, NGC 708, is a giant cD galaxy however.

The four galaxies in this area were first discovered by William Herschel and the remainder were found by John Herschel or by Lord Rosse and his assistants and d’Arrest.

The group contains 40—100 galaxies and is classified as an irregular cluster. There have been some suggestions that the cluster has two centres, one around NGC 708 and the other around NGC 785. I think this is highly unlikely given the separation of the two galaxies.

Like most large clusters of galaxies Abell 262 is permeated by a hot intracluster gas that radiates at X-Ray wavelengths because of its high temperature of approximately one million degrees Kelvin. Interestingly however in AGC there appears to be a tunnel blown in this gas from the jets from the super massive black hole in NGC 708.

One of the challenges when observing galaxy clusters is the presence of background galaxies and indeed when studying Abell 262 in the near infrared with 2MASS astronomers found that there as another cluster of galaxies in the background that showed the layered structure of the universe. The background cluster lay at a distance of almost 1 billion light years.

The group is well covered in the Webb Society Deep-Sky Observer's Handbook (DSOH) Vol.5 and has garnered increased interest recently as larger telescopes come into the hands of amateurs. Recent observations using a 56cm telescope in not such great skies by myself showed the central core of the cluster looking like a Y. The central field also showed several more galaxies and then scanning the field revealed a large number more. Unfortunately that observing session was cut short by illness. The central core galaxies should be in the range of 30cm and perhaps less.

As with most galaxy clusters it is best to be prepared with a finder chart when hunting for the galaxies here or you will miss some of the brighter ones, especially in the case of a cluster like Abell 262 that is so spread out. The supplied charts show both the extent of the cluster and the core galaxies.

Detailed observing notes can be found at the Adventures in Deep Space and Andreas Domenico's Visual Deep-Sky Observing websites. The grouping around NGC 708 is sometimes known as the Fath. I am not sure where that names comes from or to what it refers.