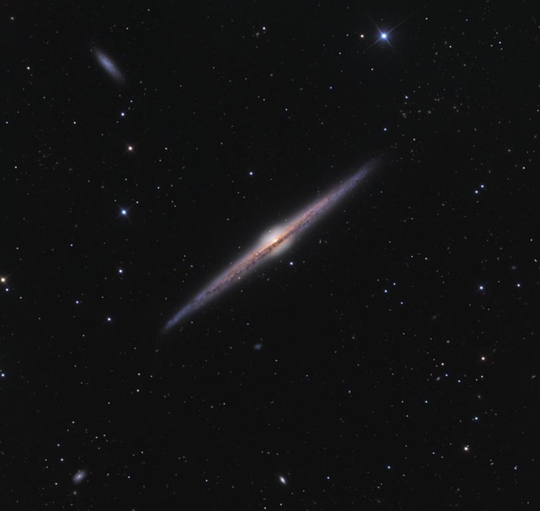 Image Courtesy of Ken Crawford, Camino, California. For more images from Ken please visit his Rancho Del Sol Observatory website. You can click on image for a high resolution version, or download a copy of our Megastar© finder chart of NGC 4565.

NGC 4565 was first discovered by the prolific William Herschel in 1785 and is an edge on spiral galaxy also known as the Needle galaxy. There is some debate as to the actual type of spiral but it is thought probably to be a barred spiral. Recent observations with the Spitzer infra-red satellite and radio observations appear to confirm this classification.

The box like nucleus is however interesting and it would appear to be interacting with one of its neighbours. This may not be NGC 4562 as that galaxy appears to be at a distance of 12.6 Mpc which is a bit further away (probably about the distance to M31 from our own galaxy), so although they may be a bound pair it is unlikely it is stirring much in the way of tides.

NGC 4565 also appears to be an AGN with there being some confusion over whether it is a Seyfert or a LINER. NGC 4565 is often used as an example of what our own Milky Way galaxy would be like if seen from the outside, however our galaxy is certainly not (at this time) an active galaxy. It is thought that NGC 4565 has about 240 globular clusters surrounding it, somewhat more than the Milky Way.

The area around NGC 4565 is littered with faint galaxies. Many of these were found photographically by Max Wolf and appear in the IC catalogue. The brightest of NGC 4565 companions is NGC 4562 (sometimes called NGC 4565A), however at around 14th magnitude this galaxy is still quite a challenge to find. It was first discovered by Tempel in 1882 with an 11" Refractor. It would appear that many of the IC galaxies discovered by Wolf are random background galaxies and are not associated with NGC 4565. The brightest of these is IC3546 (also known as NGC 4565B from the RNGC).

Off the end of NGC 4565 is a very distant cluster of galaxies that is too faint to have been in George Abell’s catalogue but shows up in deep images.

NGC 4565 is also one of the brightest members of the Coma I galaxy cloud, a collection of perhaps 206 galaxies. The fast motions of the galaxies in this area maybe a case for a dark attractor.

It is odd that such a bright galaxy that is visible in small telescopes and even in some cases binoculars was missed by Messier but it shows how inhomogeneous his searches were. NGC 4565 is probably one of the finest non Messier objects in the sky and shows much in almost any sized telescope and the prominent dark lane is visible with telescopes of maybe 20cm and above.