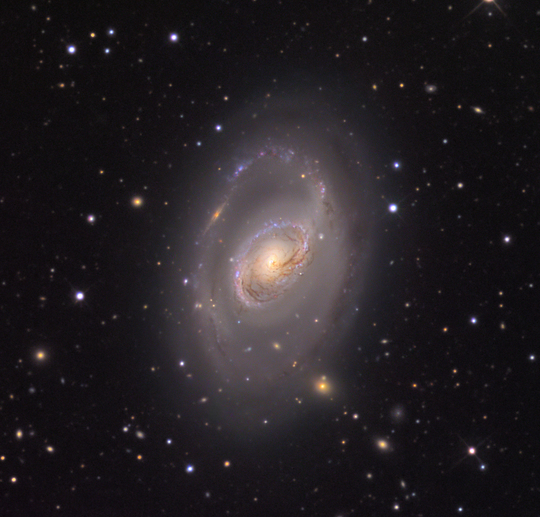 Image Courtesy of Adam Block, Arizona. For more images from Adam Block please visit his website. You can click on image for a high resolution version.

First discovered by Pierre Mechain in 1781 along with M95 and M105. M96 is a Barred spiral classified as SAB(rs)ab. About 100 thousand light years across and at about 10.8 Mpc or 36 million light years away. M96 is about the size of our own Milky Way galaxy. The nucleus of M96 displays weak AGN type activity and is classified as a LINER.

Messier received the information on his finding of M95 and M96 these galaxies from Mechain and observed M95 and M96 himself about 4 days later. Mechain found what became M105 a few days later and Messier did not have a chance to observe it and put it in the final printed catalogue. M105 was added in 1947 by Helen Sawyer-Hogg as an extension to Messer’s catalogue.

In 1998 a supernova (1998bu) was seen in M96 and proved to be of type Ia. The supernova was of interest because M96 is near enough for the Hubble Space Telescope to measure its Cepheid’s and thus provide an independent confirmation of the standard candle distances from Type Ia supernova.

M96 is one of the dominant members of the M96 group of galaxies that also contains M95 and M105. There are perhaps 8 bright galaxies in this group and may be 16 others. Also known as the Leo I group it may also include the better known Leo Trio (M65, 66 and NGC 3568). The Leo I group is a subgrouping (like our own Local Group) of the Virgo cluster. It is possible that the Leo I group and M65 group are sub clusters of a larger grouping as well.

Intriguingly there is a giant ring of neutral Hydrogen (HI) gas which surrounds the Leo I group with a diameter of perhaps 200 kpc. Although centred on M105 the ring also has traces out to M96. The ring has two possible origins being either primordial or the result of a collision with another galaxy, possibly NGC 3384, in the past. Probably the most likely scenario is the collisional one. Ultraviolet observations with the GALEX satellite suggest that there may be clumps of OB stars forming in this ring.

Observationally although M96 can be seen with small telescopes it will require larger instruments to make out any form. The whole group is a bit to spread out to be seen in a single eyepiece field except with wide field telescopes and here only a smudge may be seen. There are several other galaxies to be seen in the field particularly around M105, although many of these come under the very faint description. Although perhaps not quite as spectacular as the Leo triplet this is a group worth going after and is often overlooked.