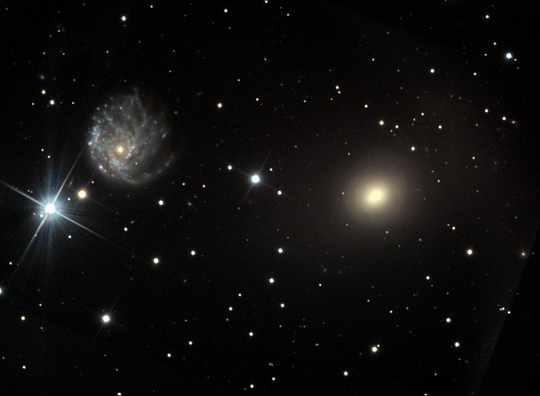 Image Courtesy of Carlos and Crystal Acosta/Adam Block/NOAO/AURA/NSF. For more images please visit the NOAO website. You can click on image for a high resolution version, or download our Megastar© finder chart of NGC 2276

The galaxy NGC 2276, also known as Arp 25, in Cepheus was discovered in 1876 by Winneke using a 6.5" refractor. It is part of a small group of three to four galaxies that also contains the galaxies NGC 2300 and NGC 2289 and possibly one other.

NGC 2276 is a very oddly shaped spiral galaxy which looks a bit like a tulip. Classified as a Sc I galaxy and it was the asymmetry caused by heavy downstream arc/spiral arm that merited its inclusion in Arp’s atlas of peculiar galaxies. There are some thoughts that the galaxy may be in the process of evolving into a galaxy with a central bar.

The NGC 2300 galaxy group was one of the first imaged in X-Rays and it showed that the X-Ray emitting gas was not associated with either of the main galaxies, NGC 2300 and NGC 2276, but clumped around something else and this was taken as proof of dark matter being heavily associated with small groups of galaxies. The cloud of hot gas was of the order of 1.3 million light years in diameter and with a temperature of the order of a million degrees to glow in X-ray light.

The shaping of NGC 2276 has also been a source of much interest. Originally it was thought to have been ram pressure as it moved through the intra-cluster gas that was causing the shape but more recent X- Ray observations show no signs of the heated gas that would be caused by these shock fronts so the current feeling is that it must be caused by tidal interactions. It is not clear if this interaction is caused by NGC 2300 or another galaxy.

The NGC 2300 group is interesting because it contains NGC 2300 which is an E0/S0 galaxy – a lenticular as well as the spirals NGC 2276 and NGC 2268. Due to the group's proximity to us the angular extent of the group on the sky is large with 1.4 degrees separating the main pair and NGC 2268. The distance to the group is thought to be of the order of 34 Mpc or about 113 million light years.

There have been several supernovae observed in NGC 2276 in the last hundred years, mostly found in the areas of strong star formation. NOAO provide a detailed view of the galaxy.

Although NGC 2276 has its own Arp number as mentioned previously the grouping with NGC 2300 also has the Arp number of 114. In some ways it is difficult to understand elliptical/spiral galaxy pairs as one assumes both galaxies were formed in the same environment and you would assume therefore that they would be of the same type.

Observationally these galaxies may be tricky to find. NGC 2300 is the brighter of the pair and the bright core should show in a 20-22cm telescope. NGC 2276 is fainter and larger and although it may be seen in 22cm it is going to require much larger telescopes to show any detail of its spiral arms.