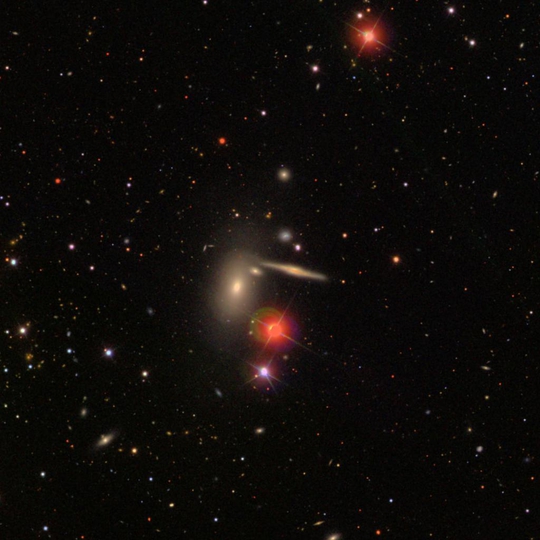 Image Courtesy of the Sloan Digital Sky Survey (SDSS). You can click on image for a high resolution version.

The constellation of Cancer is often thought to be a dead area apart from the open clusters M44 and M67. Although there are a large number of faint galaxies in Cancer most of the recent attention on these has focused on the galaxies within M44 itself. One of the overlooked groupings is the compact galaxy group Hickson 37. The group itself consists of five galaxies, the brightest of which is NGC 2783.

NGC 2783 itself was first discovered by William Herschel in 1785 but the rest of the galaxies were far too faint for him to see. It is sometimes classed as an elliptical galaxy (E7) but also as a lenticular (S0).

The second galaxy in the group IC 2449 (UGC 4856) was discovered by Javelle in 1903 using a 30" refractor. There is some confusion with the naming here as this galaxy is sometimes referred to as NGC 2783B. This error appears to come from the fact that Javelle used the wrong right ascension (RA) offset when he calculated its position and the RNGC added the B suffix. Very few modern atlases give the right name for this object. NED suggests that this galaxy is a LINER, a mild form of active galactic nucleus (AGN).

The remaining members of the group are much fainter, being around 16th magnitude. Realistically to see any of the galaxies in Hickson 37 visually is going to be a target for 18 inch and above telescopes and even telescopes with an aperture of 22" may only pickup 3 of the galaxies in the group, usually a, b and occasionally c.

It would however be an interesting target for imagers and there are very few amateur images of the group. One image taken with the Faulkes North telescope can be found on the Planet SI blog.

Most of the Hickson groups are thought to be in the process of merging into elliptical galaxies. It has however been suggested that many, if not all, Hickson groups are the cores of generally elongated loose groups of galaxies and as such may be dynamically stable over longer time spans that perhaps thought.