NGC 6928 Group of Galaxies in Delphinus 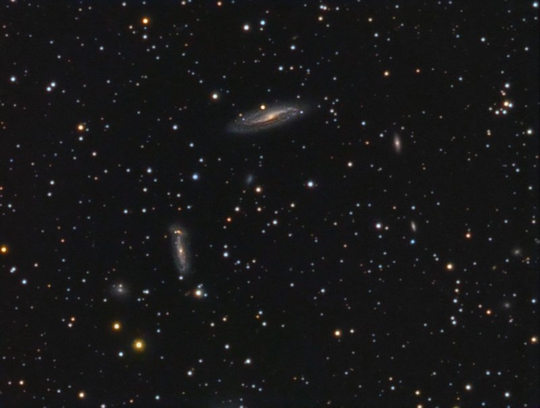 Image Courtesy of Jim Shuder, USA. Click on image for a high resolution version. For more images from Jim Shuder please visit his website. We have a Megastar© finder chart of NGC 6928. You may also be interest in this extract of Victor van Wulfen's 'Clear Skies Observing Guide' for NGC6928/NGC6930

Summer is not thought of as galaxy season but even within classic Milky Way constellations such as Delphinius there are some galaxies.

NGC 6928 could be thought of as a galaxy so good it was discovered twice. First seen by Albert Marth using William Lassell’s 48" speculum reflector from Malta it was catalogued as NGC 6928. Later it was independently rediscovered by Lewis Swift and catalogued as IC 1325. However there were still some errors and occasionally NGC 6928 is referred to as IC 1326, whereas that number in fact belongs to NGC 6930.

There is a small group of galaxies associated with NGC 6928 and it would appear that 3 of them were found by Marth and given NGC numbers (6927, 6928 and 6930) and then the two brighter ones later found by Swift and given IC numbers. It appears that Swift processed his positions incorrectly and reversed the declination sign so they were not immediately associated with Marth’s discoveries.

NGC 6828 itself is an edge on spiral galaxy classified as SBab. There appear to be 4-5 galaxies in the group and the group is known as WBL 663 from a paper on nearby poor clusters of galaxies.

The galaxies in the group are relatively faint so a 30cm or larger telescope may be required to see the brighter ones, although 22cm can show NGC 6928 itself. It will however be faint in that aperture. The NGC galaxies are NGC 6928, NGC 6927, NGC 6927A and NGC 6930. There are a number of other fainter galaxies in the field as well with one right off the top of NGC 6930 making it appear like an exclamation mark. This galaxy was too faint to be seen by the NGC compilers but has a UGC number (11590).

NGC 6927A was not a name given by the Dreyer but was a moniker given by the compilers of the RNGC who gave additional names to galaxies found on the POSS near other NGC galaxies. It would appear that probably a 45cm aperture will be needed to see NGC 6927 and that from very transparent skies.

Observations with an 18" suggest that although 6928 and 6930 were visible 6927 was too difficult. The group is in the Atlas of Galaxy Trios by Miles Paul published by the Webb Society and is also to be found in the Atlas of Galaxy Trios downloadable from Alvin Huey’s website . There are a number of other faint galaxies in the field which are listed in the PGC or MAC catalogues but these are more likely targets for imagers.