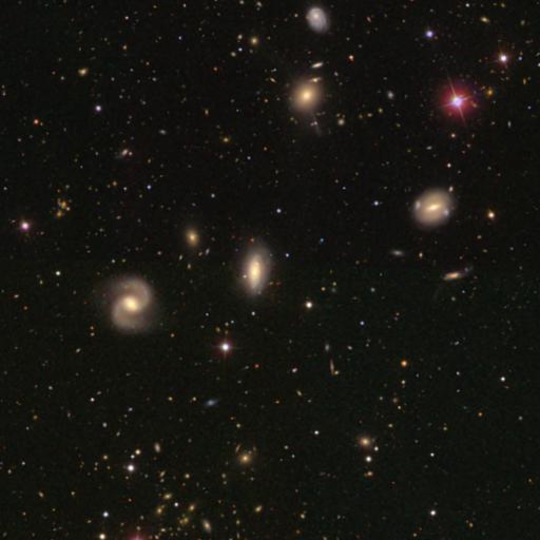 Image Courtesy of the Sloan Digital Sky Survey (SDSS). Click on image for a high resolution version. There is a Megastar© finder chart of the Hickson 58 Group.

One of the often overlooked Hickson groups is Hickson 58. Consisting of 5 relatively bright NGC objects and spread over a larger area than most other Hickson groups it perhaps is worthy of more attention. The group lies on the Leo/Virgo border (which passes through the middle of the group) and consists of the five galaxies NGC 3817, 3819, 3820, 3822 and 3825. NGC 3822 and NGC 3825 were discovered by William Herschel in 1784. NGC 3817 and NGC 3819 by John Herschel in 1828 and the much fainter NGC 3820 by Heinrich d’Arrest in 1864. It is worth noting that even that was with an 11" refractor so should be visible in moderate sized telescopes. Observations however by the renowned observer Steve Gottlieb suggests that NGC 3820 may be much more difficult to see than that. The group consists of 2 spiral galaxies, one elliptical and perhaps unusually two lenticular galaxies. However to show the difficulty of galaxy classification some sources suggest there are 4 spirals and one elliptical in the group. These are not usually seen outside large clusters of galaxies. Hickson 58 appears to lie at the centre of a loose group of galaxies. Interactions within the group appear to have stripped most of the neutral hydrogen out of NGC 3825 and NGC 3822 itself appears to be very disturbed. The group itself appears to be about 285 million light years distant. If this distance is correct then both NGC 3825 and NGC 3822 are large spirals, about the size of our won Milky Way galaxy.

There is some confusion over the identities of two of the two galaxies discovered by William Herschel in this group in the NGC. William Herschel observed two galaxies here in March 1784 and then reobserved the field in April 1784 and found two more. The galaxies discovered in March were given the identifications NGC 3848 and 3852. Later observers found nothing at the positions for these but Herschel's descriptions matched 3822 and 3825 so we can conclude that Herschel saw the same objects on two different occasions but got the positions wrong the first time. However some software may still plot these identifications.

The spread and brightness of these objects makes it a good challenge for imagers and I am surprised to find no amateur images of this group. It also lies between two Abell galaxy clusters in AGG 1354 and AGC 1356 so there will be a nice background of galaxies as well. I suspect that neither of these groups will show anything visually except in the very largest amateur telescopes.