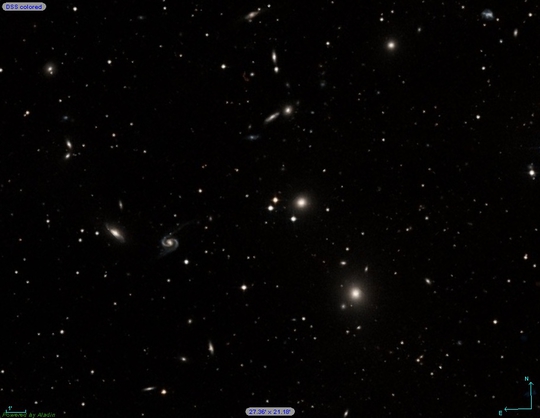 Image Courtesy of DSS - Digitized Sky Surveys at the Space Telescope Science Institute. Click on image for a high resolution version. We have a Megastar© finder chart of the NGC 80 region.

Although by accident rather than design a number of the groups of galaxies mentioned in recent galaxy of the month pieces have been part of the great Perseus-Pisces super cluster. The group discussed here surrounding the galaxy NGC 80 are also part of the western end this super cluster but unlike most of the others appear not have attracted the attention of imagers. Unusually then the colour image here was taken from the DSS.

The NGC 80 group is interesting as it contains a number of S0 or lenticular galaxies and these, much as expected, contain old stars. Of the 13 main galaxies in the group 9 appear to be Lenticular which is an unusually high fraction. Lenticular galaxies are normally thought to have been formed by interactions and ram pressure stripping in large clusters. The NGC 80 group is not however a large cluster, it does however appear bright in X-Rays which usually indicates there is a lot of hot gas.

The group had a mixed discovery history with NGC 80 itself being discovered by John Herschel but most of the other galaxies in the group being found by either Ralph Copeland using the 72" at Birr or by Bigourdan in Paris with a 12" refractor.

Unfortunately this means the group will not be easy to see and will be a challenge for medium to large telescopes. The main galaxies should be visible in perhaps 22-30 cm but to see the rest of the group is likely to require 40-50 cm aperture from dark skies. The IC galaxies in the group were discovered by Javelle with a 30" refractor and will possibly test very large telescopes. The attached finder chart from Megastar 5 gives the location and identity of the galaxies. There are perhaps 14 large galaxies in this group.

The galaxy group is part of the Astronomical League’s Galaxy Group and cluster program. It does feature in the Webb Society Deep-Sky Observer's Handbook (WSDSOH) Volume 5 which includes observations and drawings with both 40 and 76 cm telescopes. There are a few observations noted in the NSOG Volume 1.

As a challenge to the imagers it would be interesting to get a decent image of this group. Courtney Seligman has an interesting Celestial Atlas with information and images of the galaxies in this group.