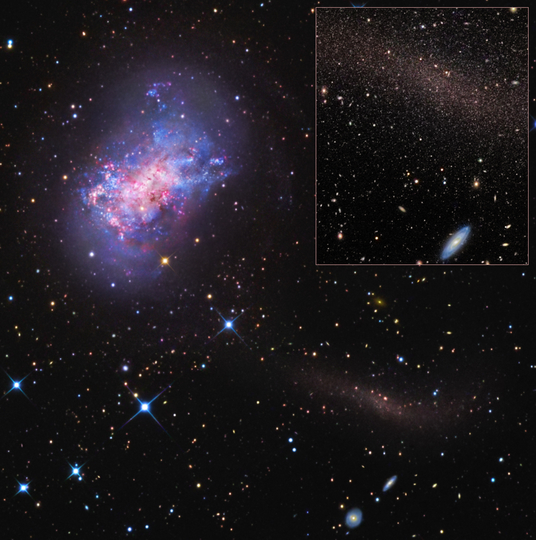 NGC 4449 is dwarf irregular galaxy similar to the Large Magellanic cloud and like the LMC appears to be undergoing vigorous star formation(See NASA APOD from 25 Feb 2011). The cause of all this activity may have been a recent interaction with the dwarf galaxy DDO 125 (UGC 7577) which currently lies about 38’ south of NGC 4449.

The age of the stars in the central bar is thought to be not much more than 5 million years or so. NGC 4449 is thought to be less than 20,000 light years across and about 12 million light years distant. It is however also surrounded by a much larger halo of neutral hydrogen gas.

First discovered by William Herschel in 1788 it is visible in telescopes as small as 8cm and because of its distinctive shape has become known as the Box galaxy.

Recent deep images of the galaxy have shown that even small galaxies like NGC 4449 can grow by merging with other galaxies and the remnants of such a merger are shown by a faint tidal stream of stars (sometimes catalogued as NGC 4449B). This is thought to be the remnant of a massive dwarf spheroidal galaxy from the type of stars in the steam and will deposit as much material again as is already in the halo of NGC 4449 (See NASA APOD from 26 Jan 2012).

Interestingly this faint companion was independently discovered by two teams of astronomers both using amateur collaborators for the deep wide field images.

Due to its proximity NGC 4449 has been well studied by the Hubble space telescope (See Hubblesite Tour - NGC 4449).

Observations recently made at the Kelling Spring star party of this galaxy using Andrew Robertson’s 24" suggest a better moniker for this galaxy might be the Lobster galaxy as coming out from the box shape are two claws. The upper one was well defined and appears in images as a row of HII regions but the lower was perhaps best defined by one large spot, which is also an HII region. The main part of the galaxy itself also shows a mottled form which is from the various star forming regions.

Much of this detail has been reported with much smaller telescopes and indeed Herschel himself was able to resolve structure with his 18.7" speculum which is probably equivalent to a modern 25 cm telescope.

Unfortunately at the time we were not aware of the UGC companion so did not seek it out. DDO galaxies do however tend to be low surface brightness objects so it is not clear we would have seen it.

There are also numerous observations of NGC 4449 in Webb Society Deep-Sky Observer's Handbook (WSDSOH) Volume 4 with telescopes up to 36".