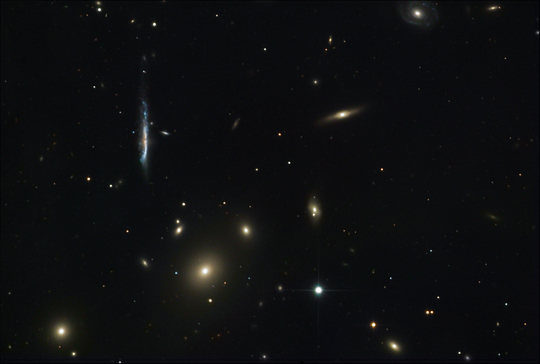 Galaxy clusters are some of the most interesting objects for observers as you can, in many cases, see multiple objects in one eyepiece field. Most observers are familiar with the Virgo and Coma clusters but Abell 1367 in Leo is often overlooked which is disappointing as there are 21 NGC galaxies in this field and with larger telescopes you can see up to 20 galaxies in the same eyepiece field.

Abell 1367, also known as the Leo Cluster, is one of the richest of the nearby galaxy clusters however its brightest galaxies are spread randomly throughout its extent with many sub concentrations. Given the cluster diameter is about 100 arcminutes (so three the diameter of the full moon) this means you have to scan across the field to find all the sub-concentrations.

I was introduced to Abell 1367 long ago via the Webb Society Deep-Sky Observer's Handbook (WSDSOH) Volume 5. This was one of my first attempts at a galaxy cluster from outside the normal run and I remember a cold night in Wales using a 16" whilst the others slept and being astonished by the number of galaxies I could see.

The view of the cluster is somewhat hampered by a bright seventh magnitude star which is near the core of the cluster around the giant elliptical galaxy NGC 3842.

The cluster does appear to have a higher ratio of spiral to elliptical galaxies than most clusters and as such is believed to have formed relatively recently as one would have expected the spiral galaxies to be destroyed by mergers and interactions over time. Indeed a number of the spiral galaxies appear to show tails in the radio which suggests matter being stripped out as they plunge through the intra cluster gas.

There is a fine finder chart for the cluster which labels the main galaxies in the group. Even more detailed charts can be got from Alvin Huey's fine downloadable guide (also available in hardcopy from the Webb Deep-Sky Society).

You should also take a look at Steve Gottlieb's observations where he identifies 63 cluster members.

The WSDSOH lists 47 galaxies in the cluster and provides observations of many. Abell 1367 also features in Philip Harrington's excellent book Cosmic Challenge.

The cluster is at about 95 Mpc from us and has an Abell classification of 2 1 II-III. When searching for information on the web use either Abell 1367 or AGC 1367 as it appears to be referenced under both. Abell 1367 together with Abell 1656 form the Coma super cluster which is the closest supercluster to the Virgo cluster of which our Local Group is a part. Both of these clusters along with the Hercules cluster appear to be part of a group of galaxies dubbed the Great Wall.