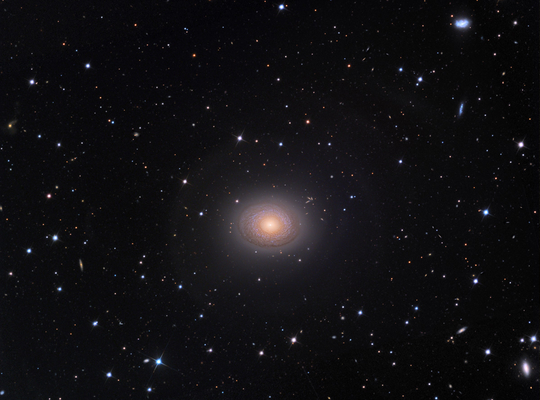 Image Credit/Copyright - Adam Block of Mount Lemmon SkyCenter / University of Arizona. Click on the image above for a larger version.

Winter is never the best time for trying to persuade observers to look at galaxies as most deep sky observers are focusing their attention on the star clusters and nebulae of the Milky Way. There are however some galaxies to be found in unexpected places.

The constellation of Cancer is perhaps best known for its two open clusters M44 and M67, but the third brightest deep sky object in this constellation is the galaxy NGC 2775.

First discovered by William Herschel in 1783 NGC 2775 is a face on spiral galaxy of an unusual type. The core of the galaxy is very prominent and has a very smooth light distribution and unlike most spiral galaxies the arms seem to start from a long way out from the centre. The spiral arms themselves are very tightly wound and appear on images at least to be discontinuous with a large number of HII regions dotted along them. The spiral arms show a very curdled appearance on deep images.

NGC 2775 is the largest galaxy in a small group which includes NGC 2773 and NGC 2777, both of which are very much fainter than NGC 2775. They were both discovered by Marth with Lassell’s 48" reflector, presumably from Malta. The NGC 2775 group is part of the larger Virgo cluster, much like our own Local group.

With a blue magnitude of 11 the core of NGC 2775 should be visible with quite small telescopes, of the order of 10cm, however to see much detail in the spiral arms will require a telescope with a much larger aperture.

Some sources suggest that NGC 2775 has been home to five supernovae in the last 30 year so it is obviously a good target for supernova hunters. I can however only find information on one in SN 1993z.

NGC 2775 appears to be at a distance of about 17 Mpc. There are some suggestions that NGC 2775 maybe interacting with one of the smaller galaxies in the field from radio observations but this is not yet certain. NGC 2775 is also of interest because it does not seem to have a significant dark matter halo.