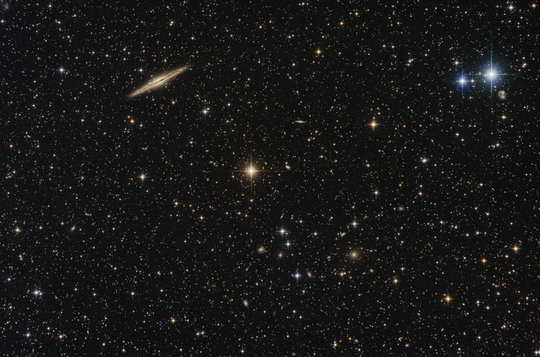 Image Courtesy of Michael Fulbright, North Carolina, USA. For more images from Michael please visit his website. Click on image for a high resolution version and you can download a Megastar© chart of the AGC 347 region.

This month’s galaxy of the month is two challenges in one.

NGC 891 is one of the finest edge on spirals in the sky. Its discovery was erroneously attributed to Caroline Herschel but it was in fact discovered by her brother William in 1784 where he described it as Bright, large and very much extended.

NGC 891 is about 10 Mpc away and about 100,000 light years across and is part of a group of galaxies that also includes NGC 1023. Although it was first thought to resemble our Milky Way recent observations with the Hubble Space telescope have shown the existence of filaments of dust colloquially known as dust bunnies.

These filaments extend hundreds of lights years above and below the plane of the galaxy. The origin of these is unclear but they may have been thrown up out of the galactic plane by supernova explosions or intense star formation activity. There are some excellent Hubble images of these features.

Observations in the Infra-red suggest that the galaxy may have a bar and its classification should perhaps be SBb. NGC 891 is in many ways similar to our galaxy in that it shows remnants of tidal star streams from the disrupted dwarf galaxies that it has merged with. Robert Gendler provides a view of the galaxy seen through an 8 metre scope.

NGC 891 is also a TV star having appeared in the start of the TV program the Outer Limits and has had its name used in at least two music tracks.

The NGC 1023 group consists of the galaxies NGC 891, 925, 1023, 1058 and 1239 along with other much smaller dwarf galaxies. Observationally I find NGC 891 can be a challenge and the ease of seeing it depends very much on the transparency of the sky. I often use it as a test for the transparency.

On good nights it is an ethereal ghost floating in a nice star field. As always what size telescope you need to see NGC 891 depends on the clarity of the skies and from high dry sites smaller telescopes will show NGC 891. Its size lends it to using a medium power eyepiece when viewing. Higher powers will show some of the detail in the dust lane and the nucleus peeping through.

Close together on the sky being about ¾ of a degree away from NGC 891, although unrelated, is the galaxy cluster AGC 347 with the main galaxy NGC 910. This is at the much greater distance of perhaps 70 Mpc – roughly 7 times further away than 891.

The cluster contains 7 galaxies included in the NGC, although only four are brighter than 14th magnitude. Most of the galaxies where discovered by Stephan at Marseille using an 80cm silver on glass reflector but two of the brightest (910 and 898) were discovered by William Herschel. There are perhaps 32 galaxies in this group scattered over an area perhaps 56’ across. The Abell classification is 0 1 II-III.

George Whiston reporting in WSDSOH Volume 5 found 7 galaxies with a 16". I would be interested to know how many observers with larger telescopes can find. Due to the nature of this group medium to high power should be used as it will help bring out the contrast between galaxies and sky and most of these galaxies are quite small.