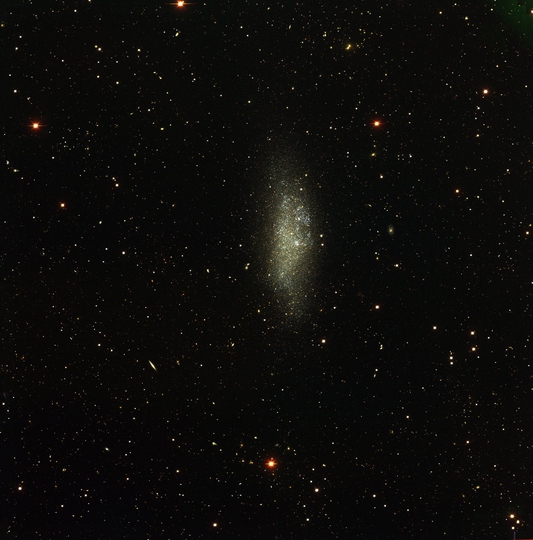 Image Courtesy of Philip Massey & Survey Team Lowell Observatory. Click on image for a larger version. For the original image click here - Warning this is a 14MB file!

With the coming of Autumn the Milky Way and its attendant nebulae and star clusters start to depart from our skies and we start seeing back into deep space and the realm of the galaxies and is the best time to try for some of the more southerly objects.

This month’s challenge, Wolf-Lundmark-Melotte (WLM) is a lot more difficult to see than some of the previous galaxy of the month objects and will need dark transparent southern skies to find. It has been seen with telescopes as small as 33cm but I suspect will need a larger one from your average UK skies.

WLM is an irregular galaxy, although it has also been classified as a dwarf E5 elliptical, which is on the fringes of the local group. First discovered by Max Wolf in 1909 photographically and it was discovered to be a galaxy by Lundmark and Melotte in 1926.

The distance to WLM has been controversial but the latest results place it at about 2.9 million light years. WLM is one of the most isolated members of the local group, its nearest neighbour is IC1613 which is almost 1 million light years away.

WLM has a halo of very old stars that date back to the earliest formation of our local group and these stars are substantially older than the stars in the core of the galaxy. The fact that the galaxy is so isolated and so small (it has a major axis of around 8000 light years but it is very elongated) suggests that the halo probably has not come from cannibalization of another small galaxy but formed with it and has remained undisturbed since that time.

As WLM is located in the southern reaches of the constellation of Cetus along with its large size (11.5 x 4.2 arc minutes) it is going to be a challenge to find from northern latitudes. The other challenge is finding it with popular star charting software as it has the designation UGCA 444 (after an extension to the UGC catalogue) but perhaps will be easiest find by either its MCG designation -03-01-015 or its PGC designation 143. It does also carry the designation DDO 221 from the David Dunlap Observatory catalogue of dwarf galaxies.

It appears that WLM has only one known globular star cluster which is slightly unusual even for galaxies this small.

My only observations of this galaxy are with a 24" from Tenerife and even then it was quite faint.