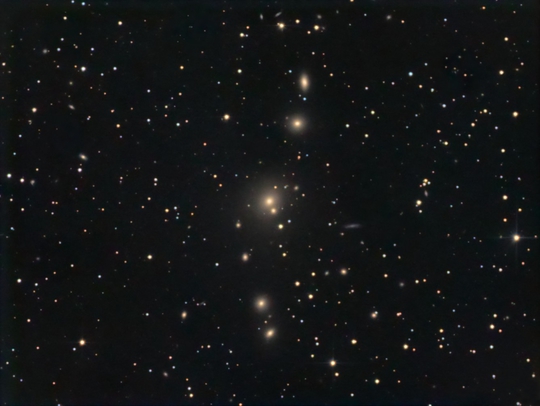 Image Courtesy of James Shuder, San Francisco, CA. Click on image for a larger version. For more images from James please visit his Image Gallery. The linked finder chart for NGC 383 will help identification of the galaxies and is courtesy Megastar.

The NGC 383 group of galaxies, also known as Arp 331 has become popularly known as the Pisces chain or Pisces cloud. The group is part of the much larger Perseus-Pisces supercluster. The main core of the group is a line of galaxies centred on NGC 383 which consists mostly of Elliptical and S0 type galaxies. NGC 383 along with 379 and 380 were discovered by William Herschel in 1784. The rest of the group was discovered by Lord Rosse and colleagues at Birr with the 72".

NGC 383 itself is a double radio galaxy with a quasar like appearance. The radio nature was discovered during the third Cambridge Survey (3C 31) and it has radio jets that appear to be interacting with the intergalactic medium. The jets have also been observed in the infra-red by Spitzer. Deep Hubble images of NGC 383 show dust arms circling the core of the galaxy. It is classified as SA0 so basically it shows the luminosity profile of a spiral galaxy but without arms. The centre of the cluster is also a strong source of X-Ray emission which appears to be coming from relativistic electrons from the jets of NGC 383.

Supernova SN 2000dk was found in NGC 382 which is the close companion to NGC 383. The main chain of galaxies here consists of 8 galaxies, although I feel that a relatively large telescope in the 40+cm class will be required to see all of them. The three discovered by Herschel should be visible in say 22cm. Outside the main group there are a number of other galaxies in the 14th-16th magnitude range that are probably part of the same group.

The NGC 383 group is probably about 65 Mpc away and the suggestion is that unless there is a lot of dark matter in the system it cannot be gravitationally stable. The group does feature in the WSDSOH Volume 5 where George Whiston observed many of its members with a 16". It appears that as with many of these galaxy groups that once you have found them switch to medium or high power to pick up the fainter members. Also check Steve Gottlieb's observations.

The NGC 507 group of galaxies is also known as the Pisces cluster so there can be some confusion. It is also one of the major subgroups in the Perseus-Pisces supercluster. The major constituents of this super cluster are the galaxy clusters Abell 262, 347 and 426.