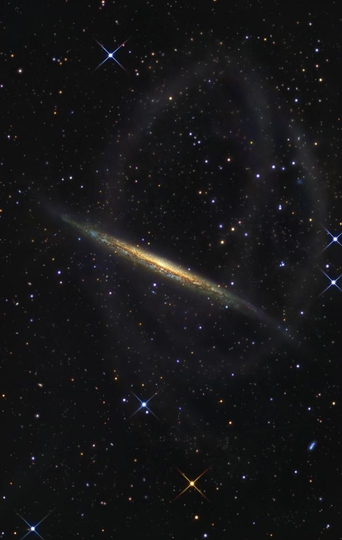 Image copyright ©2006-2008 R Jay GaBany. Click on image for a larger version. For more images from R. Jay GaBany please take a look at his website.

Summer skies preclude observing faint objects from mid northern latitudes so our galaxy this month is the bright edge on spiral in Draco NGC 5907.

NGC 5907 was first discovered by William Herschel in 1788 with his 20ft (18.7" mirror) from Slough. It is also known as the Splinter galaxy and is one of the best and brightest of the edge on galaxies, and appears to be a standard SA(s)c.

It is believed to be part of the galaxy group that includes NGC 5866 (M102). This is a very exclusive group consisting of just the three galaxies NGC 5866, NGC 5907 and NGC 5879. They form an equilateral triangle about a degree on a side. A wide field view showing all three galaxies can be found on the Starry Vistas website.

NGC 5906 and NGC 5907 are sometimes confused. It appears that NGC 5906 is actually a knot in NGC 5907, although occasionally the galaxy also goes under the same number. This confusion appears to have come from observations made at Birr with the 72".

NGC 5907 is an interesting galaxy in many ways as it seems to consist of mainly dwarf stars of low metallicity. Very few giant stars have been found in it. The galaxy appears to be about 50 million light years away.

It became famous in 2008 when an image taken by R Jay GaBany showed tidal streams wrapped around it which may represent the dying orbits of a dwarf galaxy that then became absorbed into the main galaxy maybe 4 billion years ago. These stars streams may orbit as much as 150 thousand pc from the galaxy. This may also be the way that polar ring galaxies form. Our own Milky Way galaxy contains similar star streams that are thought to be the remnants of recently ingested dwarf galaxies showing galactic cannibalism is still alive and well. What makes this image more remarkable is that it was taken by an amateur.

Recent interactions also seem to have caused NGC 5907 to have a warped disk. The warping galaxy is thought to be the small dwarf galaxy KUG 1513+566. As NGC 5907 is so bright it should be visible in binoculars and small telescopes. Owners of large telescopes might like to look for the 15th magnitude galaxy CGCG 297-11 about 7 arc minutes preceding.