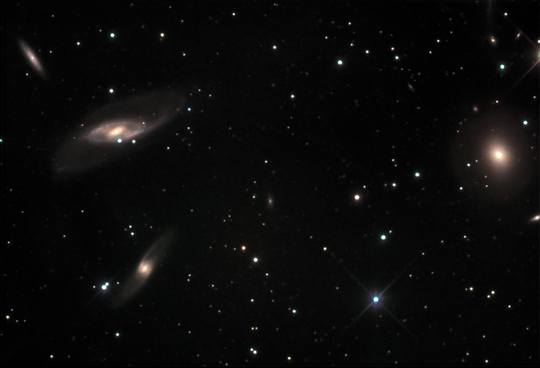 Galaxies in general can be nothing but featureless smudges through a small telescope. What enlivens galaxy observing is however trying to see features in these smudges and companions to them. My choice of galaxy of the month is the compact group Hickson 10.

Hickson 10 is one of the brighter members of the Hickson catalogue of compact galaxy groups but even so is still a challenge. This grouping consists of the galaxies NGC 529, 531, 536 and 542.

The main galaxy of the group NGC 536 was discovered in 1784 by William Herschel but he missed the other members which is a testament to their faintness. John Herschel found NGC 529 in 1827 and Mitchell working with the 72" at Birr found the remaining members of the group. NGC 536 is a fine spiral galaxy with a bright core. NGC 529 and 531 appear to be lenticular galaxies. This is slightly odd as normally these galaxies are found in large clusters where the ram pressure from the intra cluster gas has stripped the gas and dust from what started out as a spiral. Hickson 10 does not appear to be part of a larger group so maybe there are other ways of forming this type of galaxy.

There is also the challenge with Hickson groups in that they are not massive enough to survive for long periods, astronomically speaking, and therefore it is surprising that we see them at all. It is possible that these groups continually dissipate and then reform out of rich loose clusters of galaxies. There are certainly a large number of galaxies in the general area of Hickson 10, although their spatial relationship is not known.

Interestingly deep images show a shell of material around NGC 536 which is not actually centred on the galaxy. Perhaps a challenge for our imaging members to see if they can pull anything out. The location of the group near a bright 6th magnitude star will make observing them a challenge and the use of high power to keep the star out of the field may well be beneficial. Steven Gottlieb’s observations and a chart of the group can be found on his website. Other useful resources including a downloadable Atlas and an excellent Observing Guide. I suspect that the two brighter members of the group may be seen with a relatively small telescope but a much larger one will be needed to pull out the two fainter members of the group.