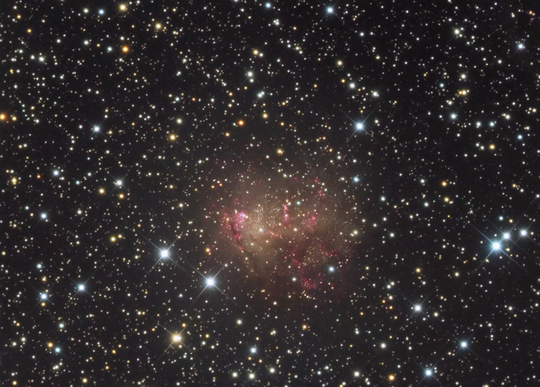 Although August is perhaps not the best month to study the dwarf irregular galaxy IC 10 it does start to rise high enough to be seen reasonably by the month end.

IC 10 was first discovered by Lewis Swift in 1885 using the 16" refractor at the Warner observatory. Swift described it as a faint star involved in a very large, extremely faint nebulosity, extremely diffuse. Hubble suggested that it might be a member of the Local group of galaxies in 1935 but it wasn’t until the 1960’s that its status as a member of the local group was confirmed when its radial velocity suggested it was approaching the Milky Way at around 350 km’s. Measurements in the 1990’s using Cepheid variables confirmed its membership.

IC 10 appears to be part of the Andromeda subgroup along with M33 and is also unusual in that it is the only starburst galaxy in the Local Group. It has a much higher density of Wolf-Rayet (WR) stars than the LMC which suggests that there was relatively brief period of time when all these stars formed, perhaps only 10 million years ago. The current star formation rate suggests that all the mass available to form stars will be used up in a few billion years.

Recent observations have led to the discovery of 27 planetary nebulae in IC10, although these are all far beyond visual reach. The spatial distribution of these planetary nebulae may indicate that the galaxy is larger than thought. Infrared observations suggest that IC 10 is depleted in small dust grains and they have been blown out of the galaxy by strong winds associated with the WR stars. IC 10 also has a very large hydrogen envelope surrounding it which appears to rotate in the opposite direction to the main visual part of the galaxy. IC 10 also appears to contain one of the largest known stellar mass black holes.

IC 10’s location within the Milky Way in Cas means that it is a relatively difficult object to observe, see the finder chart. Its size also means that you need to use a medium power eyepiece to fit it all in. There are many HII regions in the galaxy and these might respond to a nebula filter. It would be interesting to hear if these are within range of large sized amateur instruments. Because of the structure of its HII regions it does provide a good target for imagers.