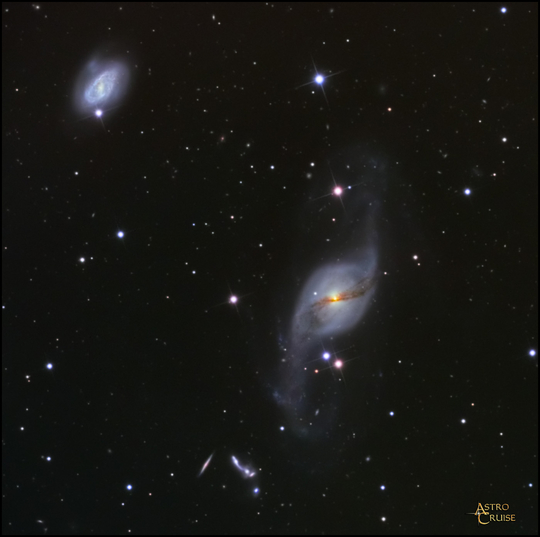 Our galaxy of the month this month is the distorted spiral galaxy NGC 3718. Also known as Arp 214 the galaxy is distinguished by distorted spiral arms and a dust lane wrapped across its centre. NGC 3718 is also a Type 2 Seyfert AGN.

First discovered by William Herschel in 1789 both NGC 3718 and the probable cause of its distortion NGC 3729 make a nice galaxy pair for northern observers . NGC 3729 also appears distorted but not as much as 3718 It appears that NGC 3718 could be evolving into a polar ring galaxy. The nucleus of NGC 3718 is not circular but definitely box shaped. Both 3718 and 3729 are classified as SB (barred spirals) but obviously they are both distorted from this basic designation.

The Webb DSOH Volume 4 suggests that it is faint but visible in a 6" whilst more modern observations from the NSOG suggest that a 30cm scope is need to see pair well.

In the same field is the small group Hickson 56. Comprised of 5 galaxies this will be a challenge for larger scopes. Three of the group appear to be interacting. I was quite surprised however when observing NGC 3718 with my 20" last spring at the Kelling Heath star party to see that the group appeared quite obvious. With one of the modern superwide field eyepieces both NGC 3718 and NGC 3729 will appear in the same field along with Hickson 56. Interestingly when the astronomers using the 72" telescope at Birr observed NGC 3718 they missed this small group of galaxies nearby. Must have been a murky night with a tarnished mirror. You may need a power of around 250x to split the group.

Associated with this the BAA Deep Sky Section and the Webb Galaxy Section are looking at doing a joint project on observing the Hickson galaxy groups and we are putting together the plans for this project shortly.