In this series of short articles, a double star in both the northern and southern hemispheres will be highlighted for observation with small telescopes, with new objects being selected for each month.

This month's targets are a coarse but interesting multiple star in Cassiopeia and an unequal pair in Piscis Austrinus. In both cases the primary stars are brighter than 5th magnitude.

1H Cas - STT 496 (23 50 01.92 +58 32 56.1) challenges the writer's ability to describe a picture in less than a thousand words so for the first time in this series he has resorted to an image to help out. (See Fig 1). The field diagram comes from Burnham's General Catalogue of Double Stars, Part 2, page 1030. 1H Cas - so called because there is no Bayer or Flamsteed letter assigned to this mag. 4.9 star, first came to be catalogued by William Herschel - and it is number H VI 25 in his catalogue, but appears as SHJ 355 in the Cambridge Double Star Atlas and the book by Sissy Haas. It is located by extending the line from gamma Cas through beta Cas by the same distance again. Herschel also noted stars F, G and H which are given magnitudes of 10.6, 11.1 and 13.0 in the WDS. For the moderate aperture there are two close binaries in the group. The first is A itself which was divided by Otto Struve. The companion B, of magnitude 9.3, is only 0".8 distant and appears to be in direct motion. Somewhat earlier, Dawes doubled C which is a little wider (1".4) and less unequal, the magnitude of the companion, D, being 9.1. Again there is slow retrograde motion. Finally, a magnitude 10 companion at 207 degrees and 231" called I in the WDS was observed by Burnham with the 36-inch Lick refractor, and also turns out to be a close binary currently separated by 0".3. 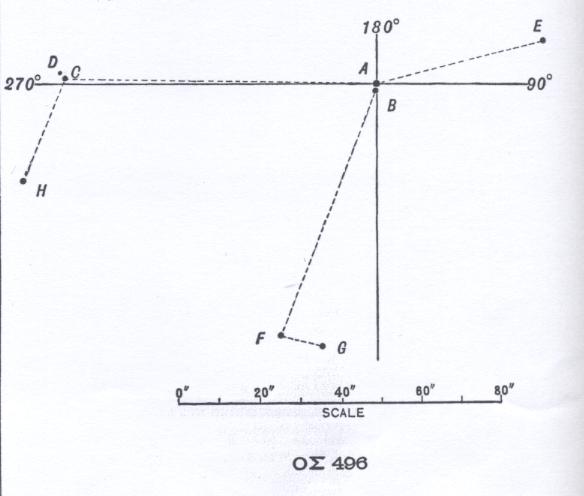 gamma PsA (22 52 31.53 -32 52 32) is about one degree south-west of delta PsA which, in turn, is 3 degrees south of Fomalhaut. Delta is a fine, unequal pair found by Howe which is almost a perfect copy of gamma which was thought to have been first seen as double by John Herschel whilst at the Cape of Good Hope in 1835. In fact, Brian Warner, writing in the Monthly Notices of the Astronomical Society of Southern Africa in 1977 (Vol 36, page 134) makes a case for the duplicity of gamma PsA having been found by Fearon Fallows, the first Astronomer Royal at the Cape, a few years before. Fallows used a Mural Circle and a Transit instrument and made a couple of lists of double stars which he had happened across during the course of routine observations. Gamma is a very unequal system, magnitudes 4.5 and 8.2, with a companion which is slowly widening and is currently 4" distant. The primary is an AO giant some 217 light years away although Hartung (using a 30-cm reflector) saw the colours as pale and deep yellow whilst Gould with 175-mm also from Australia called the primary `off-white'.